Arsenal’s injury problems continue to mount as Wenger has confirmed that Lukas Podolski has picked up a groin injury and will miss the FA Cup clash with Hull. 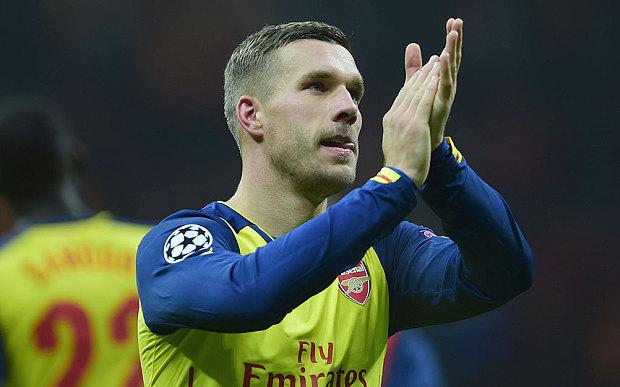 Arsenal’s injury problems continue to mount as Arsene Wenger has confirmed that Lukas Podolski has picked up a groin injury and will miss the FA Cup clash with Hull.

Podolski was surprisingly left out of the squad that travelled to St Mary’s ahead of Thursday’s defeat to Southampton with newspaper reports claiming the German had stormed out of training on Wednesday.

However, Arsene confirmed to Arsenal.com after the game that Podolski had a good chance of starting today but was ruled out after picking up a groin injury.

With our FA Cup third round clash with Hull coming just 48 hours after the Southampton game, Wenger has also confirmed he’ll make changes on Sunday but unfortunately Podolski is unlikely to be available in time.

Podolski was injured today. He had a tight groin.

on whether Podolski would have started against Southampton…

He was not available but he had a big chance to start.

on Podolski playing against Hull City…

I will make a few changes, that’s for sure, but he has not practiced for a few days – since our game at West Ham because of a tight groin so I don’t think he will be available for Sunday.

Podolski has been on the fringe of the first team all season and has been strongly linked with a move away from the club this month, with Inter Milan understood to be keen on taking him to Serie A.

Wenger confirmed the Italians interest but branded their first proposal as ‘farcical’, and refused to confirm if the attacker will definitely leave during the January transfer window.

on the reported transfer to Inter Milan…

The first proposal was farcical. After, when they come back a bit more seriously, then you will see what happens now.

on whether it is inevitable…

Inevitable? In the transfer window that’s very difficult to say but we’ll see what happens.

I think it’s safe to say there is a strong chance Podolski will not only leave soon, but may not play another game for Arsenal, with a switch to Inter more than likely.

I will personally be disappointed to see him go as he’s a useful player to have in the squad, as his goal and assist ratio is excellent, so it will be interesting to see if Arsene brings in a replacement or relies on the players we currently have in the squad.