Tottenham will look to keep their hopes of a top four finish alive when they take on Aston Villa this afternoon. Here’s a preview with team news and prediction

Tottenham Hotspur will look to keep their hopes of a top four finish alive when they take on Aston Villa this afternoon.

The game will see Tim Sherwood return to White Hart Lane for the first time since being sacked last May having led the club to a sixth placed finish.

Sherwood brings his rejuvenated Villa side to the capital in desperate need of points as they sit just three points above the relegation zone following their midweek 3-3 draw with QPR.

Spurs season is in danger of slipping away as they left themselves a mountain to climb to finish in the top four following last weeks 0-0 draw at Burnley which leaves them sixth in the table and seven points adrift of fourth-placed Man City.

If the North Londoners are to keep alive any hopes of qualifying for the Champions League next season then they know only victory will do tomorrow.

Tottenham goalkeeper Hugo Lloris is set to miss out once again having failed to train all week due to a knee injury that kept him out of last weeks draw at Turf Moor.

Right-back Kyle Walker is also expected to miss out after suffering a foot injury last time out so Vlad Chiriches may have to revert to right-back.

Centre-back Jan Vertonghen is a doubt with illness but the Belgian is expected to be passed fit to return to the side.

As for Villa, they will be without defender Alan Hutton who is out with an ankle injury while Ashley Westwood and Scott Sinclair are also out with a hamstring problems.

Carles Gil is another doubt due to a dead leg but Aly Cissokho could be back in the squad after a groin injury. 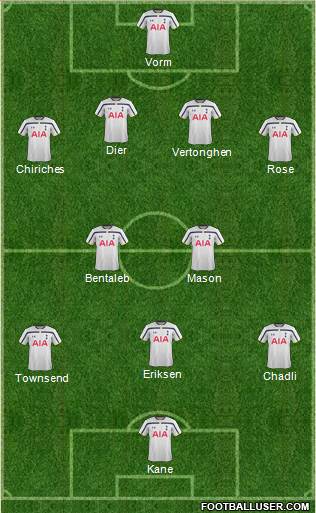 Tottenham 2-1 Aston Villa: Spurs were extremely poor last week so I’d expect Mauricio Pochettino to demand a response this afternoon and I can see the North Londoners edging this one – but I think Sherwood’s side will give a good account of themselves.

Tottenham are the 6/10 favourites to win the game but Football-Talk can get you enhanced odds of 3/1 for a Spurs win, plus you can get money back if you lose + £100 in free bets. My prediction of 2-1 is available at 7/1 while I also like the look of Harry Kane opening the scoring at 3/1. If we combine those bets in a scorecast then we get very tempting odds of 14/1. Surely that’s got to be worth a couple of quid!?