Liverpool have suffered a major injury blow with boss Brendan Rodgers admitting that Daniel Sturridge may not be fit to play again this season. 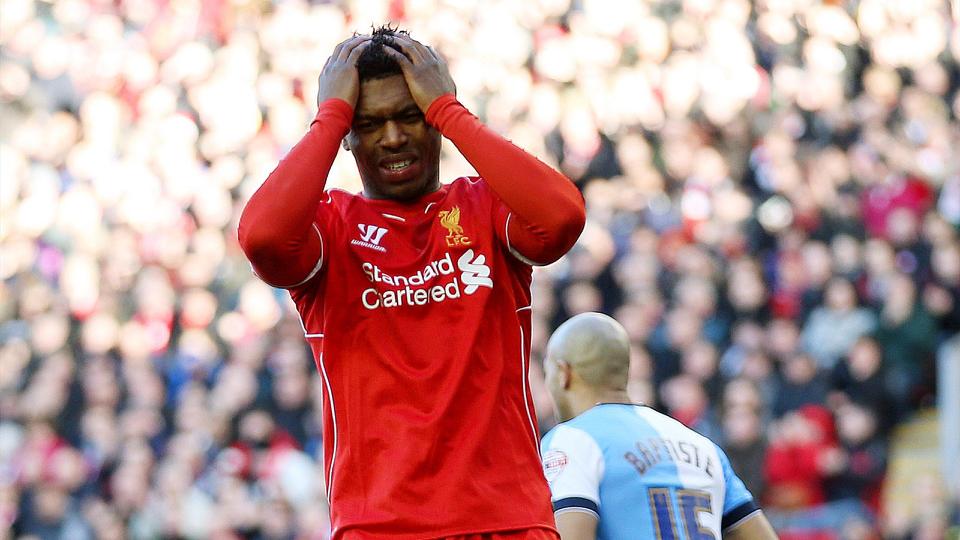 Liverpool have suffered a major injury blow with Brendan Rodgers admitting that Daniel Sturridge may not be fit to play again this season.

The 25-year-old striker has missed the last three games against Newcastle United, Aston Villa and West Brom with a hip injury that he aggravated during Liverpool’s FA Cup clash with Blackburn earlier this month.

It had been hoped that Sturridge may return to full training soon and be fit to play a part in Liverpool’s Premier League run-in.

However, speaking to the media at his pre-match press conference ahead of tomorrow night’s trip to Hull, Rodgers confirmed that the club are going to assess the striker on a daily basis but admitted that he may not play again this season if it’s in the best interest of his long-term fitness.

“It has been difficult for Daniel, of course,” said Rodgers. “Daniel is a good lad who obviously wants to play, wants to be working and helping the team.

“But it has just been one of those seasons for him where he has been very unfortunate and has just missed out. We’re just going to have to monitor that day by day and see where he’s at.

“When he’s been fit he’s been brilliant for the team, the key now is to see if we can get him back fit and consistently playing. We’ll see if that’s going to be this season or the pre-season.

“We’ll do what’s in the best interests of him; we have to protect Daniel and make sure he’s going to be here over the next number of years, playing and playing to the level that we all know he can.”

Sturridge has endured a hugely frustrating season that’s been plagued by a series of injuries with thigh and hamstring problems seeing him miss practically the entire first half of the season, which meant he failed to make a single appearance in the Champions League.

The No.15 returned in late January but was well below his best as he struggled for match fitness and eventually broke down again with this hip injury after making just 14 appearances.

His injury woes mean Sturridge has made just 18 appearances in all competitions – scoring 5 goals – and now he’s facing the possibility of not playing any part in Liverpool’s remaining fixtures against Hull, QPR, Chelsea, Crystal Palace and Stoke.

That will come as a huge blow to Rodgers as he looks to close the gap on the top four and keep alive Liverpool’s hope’s of playing in the Champions League again next season.