The Gunners made it four wins in a row with a 2-1 victory over Everton at the Emirates on Saturday evening with Laurent Koscielny making the cut after his first half header ended up being the eventual winning goal.

The French centre-back is joined in the eleven by team-mate Santi Cazorla with the Spanish midfielder grabbing an assist during an impressive all-round display that earned him a WhoScored rating of 8.46 – which was the highest of any midfielder in the league this past weekend.

Arsenal’s North London rivals Tottenham were also in impressive form as they put five past Bournemouth on Sunday and unsurprisingly three of their players have made it team of the week.

Kyle Walker and Erik Lamela make the cut but it was Harry Kane who stole the headlines as he netted a hat-trick for Maurcio Pochettino’s side to earn him a perfect 10/10 score.

The Manchester derby was a disappointment yesterday as both sides cancelled each other out during a 0-0 draw at Old Trafford with Nicolas Otamendi arguably the stand-out player at the back for City. The Argentine secured his place in the TOTW with a score of 7.94.

Check out the eleven here: 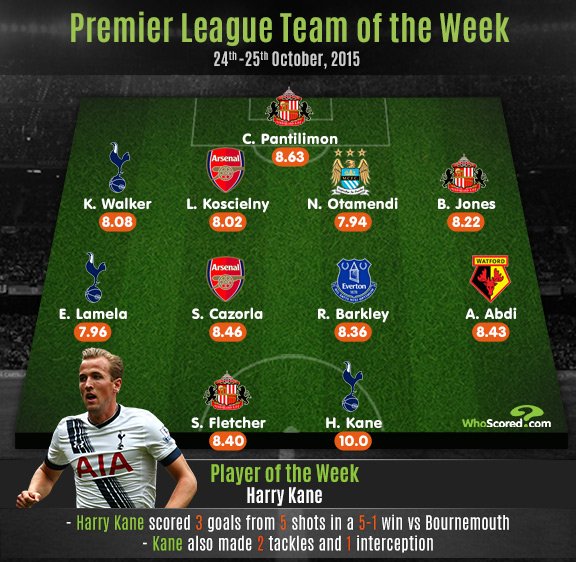