Liverpool will look to avoid a banana skin when they take on League Two Exeter at St James Park tomorrow night. Here is the side I think Jurgen Klopp will pick.

An injury hit Liverpool squad will look to avoid a banana skin when they take on League Two Exeter City at St James Park in the 3rd round of the FA Cup tomorrow night. Here is the side I think Jurgen Klopp will pick.

Goalkeeper: Adam Bogdan could be recalled to the starting eleven in order to hand Simon Mignolet a breather.

Defence: Klopp has hinted he’s ready to make wholesale changes in order to protect his senior players after the squad was hit by another spate of injuries. Defence in particular has been decimated with Kolo Toure [cramp] joining Dejan Lovren on the sidelines after the Croatian picked up a hamstring injury during the win over Stoke in midweek.

Martin Skrtel, Mamdou Sakho and Joe Gomez are also out injured so Klopp has been forced to recall Thiago Llori from his loan spell at Aston Villa. The youngster is expected to start as long as he’s registered in time and he could be joined by Lucas Leiva at the back with the Brazilian filling-in as a make-shift centre-back.

Youngsters Brad Smith and Connor Randall could play in the full-back slots with Alberto Moreno and Nathaniel Clyne rested ahead of the Arsenal game.

Midfield: Jordan Henderson remains out after suffering a recurrence of a long-standing heel injury so Cameron Brannagan could be drafted in to start alongside Joe Allen in midfield with Emre Can given a breather.

Attack: James Milner made his comeback off the bench against Stoke so could start tomorrow night. Sheyi Ojo is expected to feature after being recalled from his loan at Wolves while Joao Teixeira is another who could start in attack. 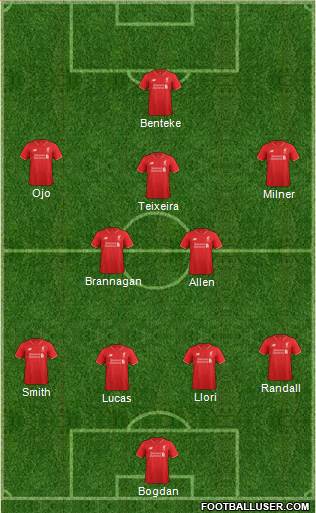