Man Utd will look to book their place in the 4th round of the FA Cup when they entertain Sheffield Utd at Old Trafford on Saturday. Here is our predicted team

Manchester United will look to book their place in the fourth round of the FA Cup when they entertain Sheffield United at Old Trafford on Saturday evening. Here is the side I think van Gaal will pick:

Defence: van Gaal is expected to field a strong side as he’ll look to build some momentum following the win over Swansea last week as the last thing the Dutchman needs is the pressure to increase on his shoulder by crashing out of the FA Cup.

Therefore, I think we’ll see Chris Smalling, Phil Jones and Daley Blind all retain their places at the back with Matteo Darmian possibly the only change with the Italian coming in for Ashley Young at right-back. Antonio Valencia, Marcos Rojo and Luke Shaw all remain out through injury.

Midfield: Michael Carrick is likely to be recalled to the starting eleven after being left on the bench for the last two games with Bastian Schweinsteiger rested. Morgan Schneiderlin should retain his place in the middle of the park ahead of Marouane Fellaini.

Attack: Anthony Martial could be given a breather with Memphis Depay drafted in on the left-wing. Otherwise I think we’ll see the same attack that faced Swansea with Ander Herrera and Juan Mata supporting Wayne Rooney. 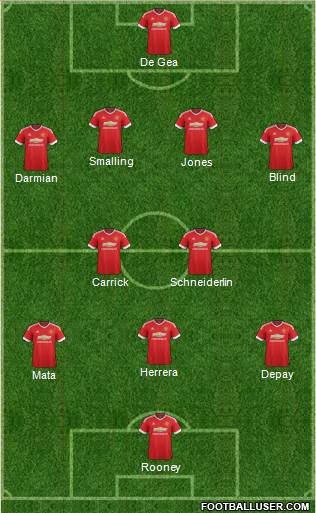