Here is team news and our predicted line-up ahead of Tottenham’s FA Cup third round clash with Leicester City at White Hart Lane this weekend.

Tottenham will look to book their place in the fourth round of the FA Cup when they take on Leicester City at White Hart Lane on Sunday afternoon. Here is team news and the side we think Mauricio Pochettino will select for the game:

Goalkeeper: Pochettino isn’t usually one to rotate his keeper in the cups so Hugo Lloris is expected to start with Michel Vorm on the bench.

Defence: The Spurs boss may decide to mix things up at the back though with Kieran Trippier and Danny Rose coming in to the back four. Kevin Wimmer could also be given a rare run-out with Toby Alderweireld handed a well-earned rest.

Midfield: Pochettino has confirmed to TottenhamHotspur.com that Ryan Mason and Mousa Dembele are close to making their comebacks from injury but this weekend will come too soon so they will both miss the game against Leicester.

Nabil Bentaleb could be handed a start after getting himself back to full fitness and with Eric Dier likely to be rested, Tom Carroll could keep his place in the middle of the park.

Attack: Deli Alli should continue in the free role but Christian Eriksen and Erik Lamela could be given a rest with Nacer Chadli and Hueng-min Son brought in to the attack. With Clinton N’Jie still out injured, Harry Kane is likely to lead the line up front once again. 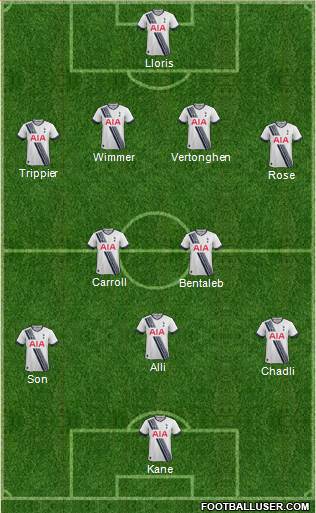