Liverpool will be looking to book their place in the fourth round of the FA Cup when they take on Exeter at Anfield in their third round replay tonight.

The Reds needed a late goal from Brad Smith to force a replay at St James Park 12 days ago but the Merseysiders should now be confident of finally seeing-off the League Two outfit on home soil to book a fourth round date with West Ham.

Jurgen Klopp will be demanding a response after seeing his side slump to a disappointing 1-0 defeat to North-West rivals Manchester United on Sunday which leaves them sitting ninth in the table and eight points off the top four.

Exeter proved they are no pushovers in the original tie but they face a mammoth task at Anfield and boss Paul Tisdale has urged his players just to enjoy themselves and not worry too much about booking their place in the fourth round for the first time since 1981.

Klopp has confirmed he’ll make wholesale changes to his starting eleven and field the youngsters and fringe players as he looks to protect his key men during a gruelling January fixture list.

Adam Bogdan has been axed from the squad for the last two matches since starting in the original tie but with Danny Ward ineligible and Simon Mignolet expected to be rested, it looks like the Hungarian international could return in goal this evening.

Steven Caulker is also unavailable as he wasn’t registered for the original game so with Martin Skrtel and Dejan Lovren still injured, Jose Enrique may be forced to line-up alongside Tiago Llori in the middle of defence. Kolo Toure and Mamadou Sakho should get well-earned rests.

Joe Allen didn’t feature against United at the weekend so he could add some experience in midfield alongside youngster Cameron Brannagan while Joao Teixeira and Sheyi Ojo could be joined by Jordon Ibe in attack.

Christian Benteke is expected to be recalled up front with Daniel Sturridge once again ruled out while Jon Flanagan is set to be named on the bench as he continues to step-up his return from 18 months on the sidelines. 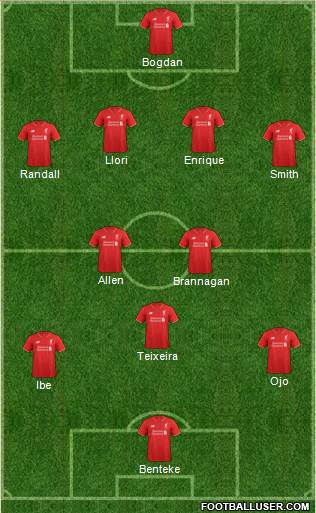 Liverpool 2-0 Exeter: Liverpool were slightly unfortunate to loss to United at the weekend but we’re going to see a very different line-up this evening. Despite the changes, I still expect the hosts to have far too much quality for the League Two side and I’m backing Liverpool to ease into the fourth round with a 2-0 win.

Liverpool are the 1/3 favourites with the bookmakers but Football-Talk can get you enhanced odds of 6/1 on a home win – just click here to take advantage of this limited time offer . My prediction of 2-0 is available at odds of 13/2 while I also like the look of Benteke to open the scoring at 14/5. If you combined those two bets in a score-cast then we get very tempting odds of 14/1.