Manchester United have been handed a timely injury boost with a key man due for a swift return and could be back in time to face Manchester City. 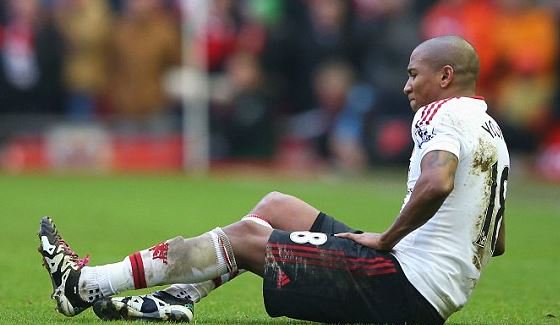 Manchester United have been handed a timely injury boost with the news that Ashley Young’s groin injury isn’t as bad as first feared and he could be back in time to face Manchester City, according to the Daily Mail.

Young was forced off with a groin injury during United’s 1-0 victory over Liverpool at Anfield earlier this month and it was thought the 30-year-old may not play again this season after Louis van Gaal described the injury as ‘severe’ having confirmed the winger turned full-back would need to be operated on.

Speaking after the win at Anfield, van Gaal is quoted as saying by the Daily Mail:

‘Ashley Young has a severe groin injury. It shall be operated on, so he’s out for a long time.

‘It’s unbelievable, but we’re not lucky with that.”

However, it looks like United have received some positive news as the Daily Mail claim that following further tests, the injury is not thought to be as serious as first thought and Young is now expected to return in six-to-eight weeks.

United head to the Etihad Stadium to take on rivals Man City on March 20, so I’m sure Young will be desperate to get himself fit for the huge Manchester derby. It could be tight if the midfielder takes the full eight weeks to recover but no doubt he’ll push himself in the gym and do all his football training drills with the coaching staff to get himself available for selection to face City.

The news will come as a big boost to United as they’ve seen several full-backs ruled out this campaign with Luke Shaw, Antonio Valencia and Marcos Rojo all currently nursing long-term injuries.

van Gaal was expected to be forced into the transfer market to sign another full-back following Young’s injury last weekend as he’s been asked to deputise at the back this season due to the Dutch bosses lack of options.

However, the United coach may now decide against bringing in a new face and just trying to go with what he’s got until the summer given that Young could be back playing again in six weeks.