Liverpool will look to book their place in the fifth round of the FA Cup when they take on West Ham on Tuesday. Here is the side I think Jurgen Klopp will pick.

Liverpool will look to book their place in the fifth round of the FA Cup when they take on West Ham in their replay at Upton Park on Tuesday night. Here is the side I think Jurgen Klopp will pick.

Goalkeeper: Number one goalkeeper Simon Mignolet started in the original tie as Adam Bogdan has fallen out of favour so I suspect the Belgian will keep the gloves on Tuesday night.

Defence: Klopp is once again expected to make wholesale changes to his side which means Steven Caulker should get another chance to impress alongside Kolo Toure at the back. Jon Flanagan should also come in for Nathaniel Clyne at right-back while youngster Brad Smith could start on the left in place of Alberto Moreno.

Midfield: Lucas Leiva was dropped to the bench during Saturday’s 2-2 draw with Sunderland and only played the final couple of minutes so the Brazilian international is expected to come back in to the starting eleven tomorrow night.

Cameron Brannagan would usually have started in a game like this but he’s been ruled out through injury so we could see Joao Teixeira alongside Kevin Stewart. Joe Allen or Emre Can are on stand-by if Klopp wants to go with a more experienced midfield but Jordan Henderson is set to get a breather.

Attack: Liverpool have been handed a welcome triple injury boost in attack with Daniel Sturridge, Philippe Coutinho and Divock Origi all back in the squad after recovering from injuries.

Klopp has confirmed that not all three will start as they aren’t fit enough to play the potential extra-time that may be required so I have a feeling only Coutinho will start with Sturridge and Origi introduced from the bench.

Jordon Ibe could start on the wing with the likes of Adam Lallana and Roberto Firmino rested while Christian Benteke could spearhead the attack up front after being an unused substitute last time out. 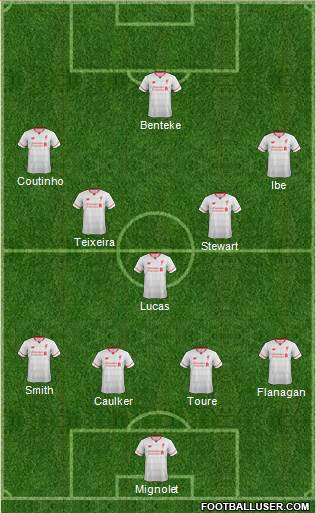