Man Utd will look to book their place in the quarter finals of the FA Cup when they take on Shrewsbury tomorrow. Here is the side I think van Gaal will pick:

Manchester United will look to book their place in the quarter finals of the FA Cup when they take on Shrewsbury Town on Monday night. Here is the side I think van Gaal will pick:

Goalkeeper: David de Gea is expected to miss out after picking up a knee injury during the warm-up shortly before Thursday’s Europa League defeat at FC Midtjylland so Sergio Romero will continue in goal.

Defence: van Gaal has problems in defence as Matteo Darmian has been ruled out with a dislocated shoulder and with Phil Jones, Antonio Valencia, Luke Shaw, Marcos Rojo and Ashley Young also out through injury, the Dutchman has limited options to choose from.

Cameron Borthwick-Jackson is expected to return from illness so he should resume his role at left-back which would see Daley Blind move back in to the middle alongside Chris Smalling and Paddy McNair moving to right-back.

Midfield: Morgan Schneiderlin could get a recall to the starting eleven alongside Michael Carrick with Ander Herrera dropping out. Bastian Schweinsteiger remains out with a niggling knee injury while Marouane Fellaini has been ruled out with a hamstring problem.

Attack: Wayne Rooney is facing up to two months out with a knee injury so Anthony Martial should continue to lead the line up front. Jesse Lingard and Juan Mata should keep their places in the attack while Memphis Depay may have done enough to retain his place after getting on the score-sheet in midweek. 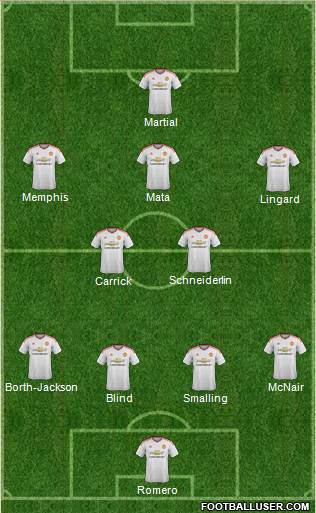