Manchester City’s Gael Clichy is included but it’s Tottenham who dominate the WhoScored Premier League Team of the Week with four players in the line-up.

Manchester City’s Gael Clichy is included but it’s Tottenham Hotspur who dominate the WhoScored Premier League Team of the Week with four players in the line-up.

City saw their title challenge dented with a frustration 0-0 draw away to Norwich City on Saturday afternoon but the clean sheet saw Clichy earn a score of 8.19 which was enough to see him named in the TOTW.

Tottenham maintained their own title push with a comfortable 2-0 victory over relegation-threatened Aston Villa on Sunday with Dele Alli once again impressing as he grabbed two assists to secure a score of 7.98.

The youngster combined wonderfully well with striker Harry Kane as the England international scored both goals at Villa Park, and his score of 8.78 was enough to see him named in the Team of the Week.

Alli and Kane were joined in the line-up by team mates Kyle Walker and Mousa Dembele with the duo earning their places with scores of 8.04 and 7.83 respectively.

However, it was Southampton striker Graziano Pelle who notched the highest score of the week [9.07] with his two-goal display helping the Saint’s to a 2-1 win at Stoke on Saturday afternoon. 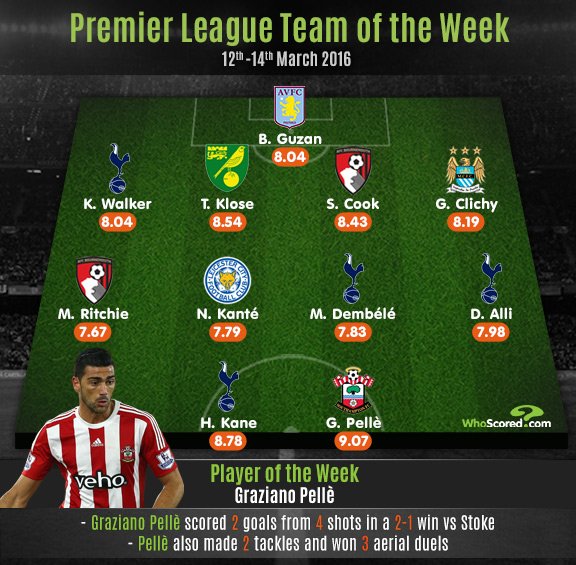