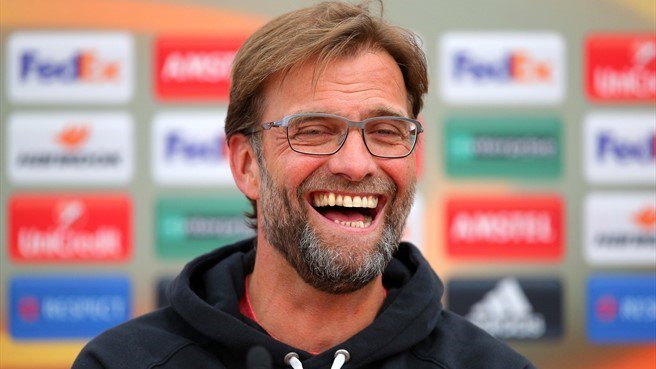 Liverpool will look to book their place in the semi finals of the Europa League when they entertain Borussia Dortmund at Anfield on Thursday night.

Ahead of the game, Jurgen Klopp has been speaking to the media at his pre-match press conference this afternoon and he’s given Liverpoolfc.com a team news update.

The German coach was pleased to confirm that the Merseysiders didn’t suffer any fresh injury concerns following Sunday’s 4-1 demolition of Stoke City so he’ll have much the same squad to choose from tomorrow night.

Liverpool do still have their injury problems though as Jordan Henderson is likely to miss the rest of the season after suffering a knee ligament injury earlier this month while Christian Benteke is also out with his own knee problem.

The pair join long-term injury victims Danny Ings, Jordan Rossiter and Joe Gomez on the treatment table meaning Klopp will be without five players through injury tomorrow, while Jon Flanagan is ineligible to play in the Europa League.

Despite this, Klopp knows he still has plenty of selection decisions to make on Thursday night as he gets ready to welcome former club Dortmund to Anfield for their crucial second leg.

When asked for a team news update at his press conference earlier, Klopp is quoted as saying by the clubs website:

“All of them [are fit], nothing happened really after the Stoke game. I have heard nothing so everything is OK.

“In a perfect world, each player is in the best shape he can be in. You have always more than 11 players, so there are always difficult decisions. This situation is more of a moment where you can make no mistakes as a manager [because] each player you take and bring into the line-up is in good shape, so that’s good news.

“It will be not too difficult [to pick a line-up], it’s only difficult for the players to accept in moments like this that they are not in the line-up because they feel good and they feel confident. If you are not involved in a game, not even in the squad, that’s the problem.

“It’s not difficult that I don’t know who to bring into the game. It’s more than 11 players, more than 16 players, in a good shape and that’s good news – and that’s all.”

Liverpool go in to the game tomorrow night after coming back from Germany with a very useful 1-1 draw from the first leg last week so Klopp will be confident of making it another memorable European night at Anfield and booking their place in the last four.