Manchester United take on Crystal Palace in the FA Cup final at Wembley on Saturday evening. Here is the side I think Louis van Gaal will pick:

Manchester United will look to lift the FA Cup for the first time since 2004 when they take on Crystal Palace at Wembley on Saturday evening.

Here is the side I think Louis van Gaal will pick:

Goalkeeper: David de Gea is certain to keep his place in goal this weekend.

Defence: Matteo Darmian is back in contention after recovering from an ankle injury but Antonio Valencia could keep his place at right-back. Marcos Rojo is also available again having overcome a knock which kept him out of Tuesday night’s win over Bournemouth and he should replace Cameron Borthwick-Jackson at left-back. Daley Blind should once again start alongside Chris Smalling in the middle of defence.

Midfield: Marouane Fellaini is back after serving his three-match suspension but Morgan Scheniderlin is likely to start ahead of the Belgian international after overcoming the illness that kept him out of the Bournemouth game.  Bastian Schweinsteiger will miss out with a long-standing knee injury but Michael Carrick should once again start in midfield.

Attack: Wayne Rooney is expected to be deployed in a deeper role behind Marcus Rashford while Juan Mata and Anthony Martial should make up the attack. Jesse Lingard and Ashley Young are among those pushing for starts if van Gaal wants to mix things up. 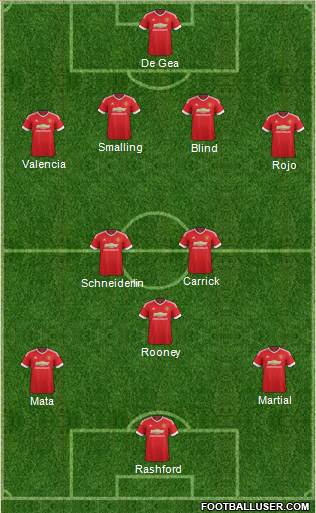