Liverpool entertain Tottenham at Anfield in the EFL Cup on Tuesday night. Here is the side I think Jurgen Klopp will select for the game:

Liverpool will be hoping to book their place in the next round of the EFL Cup when they entertain Tottenham at Anfield on Tuesday night.

Goalkeeper: The Reds boss has confirmed that Simon Mignolet will start between the sticks and get a chance to impress with No.1 Loris Karius dropping to the bench.

Defence: Klopp has named strong sides in the previous rounds but the German is being tipped to make plenty of changes for the visit of Tottenham with Alberto Moreno and Ragnar Klavan set to come in to the defence.

Youngster Trent Alexander-Arnold could be given a start at right-back in order to give Nathaniel Clyne a breather but Klopp may decide to stick with Dejan Lovren in the middle of defence to add a bit more experience.

Midfield: Georginio Wijnaldum made his return from the bench against West Brom at the weekend after recovering from a hamstring injury and the Dutchman could be brought back in to the starting eleven to help build up his fitness levels.

Marko Grujic has struggled to break in to the starting eleven with the likes of Adam Lallana, Emre Can and Jordan Henderson well ahead of him in the pecking order but the summer signing is in-line for a run out in midfield tomorrow while Lucas Leiva should also get a recall in the holding role.

Attack: Sadio Mane, Philippe Coutinho and Roberto Firmino are all expected to be rested against Spurs meaning Daniel Sturridge is likely to come back in to the side along with Divock Origi – who’s struggled to make an impression so far this season.

However, the big news is that Danny Ings is being tipped to make his first start for the first team this season after impressing for the under-23’s in recent weeks. The striker has now recovered from a serious knee injury and has looked sharp with the youth side, so could lead the line up front tomorrow night. 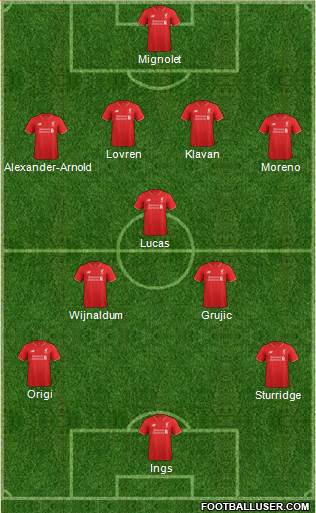