Tottenham Hotspur take on Liverpool in the EFL Cup at Anfield on Tuesday night. Here is the side we think Mauricio Pochettino will select for the game:

Tottenham will look to book their place in the next round of the EFL Cup when they take on Liverpool at Anfield on Tuesday night.

Goalkeeper: The Spurs coach has already confirmed he’ll make wholesale changes to his starting eleven with Michel Vorm set to come in for Hugo Lloris between the sticks.

Defence: Toby Alderweireld continues to nurse a knee injury that’s kept him out of the last two games while Jan Vertonghen, Eric Dier, Danny Rose and Kyle Walker should all be given a breather.

Kieran Tripper and Ben Davies are expected to come in at full-back while Kevin Wimmer could be joined by youngster Cameron Cater-Vickers in the middle of defence.

Midfield: Pochettino has given a strong hint that Harry Winks will replace Victor Wanyama in the holding role after telling reporters today that he feels the youngster has what it takes to play in the sole defensive midfield role in front of the defence.

Dele Alli will get a rest while it’s unlikely Mousa Dembele will play again so soon after completing his first 90 minutes of the season so youngsters Tom Carroll and Josh Onomah are likely to play in midfield at Anfield.

Attack: Harry Kane remains out with an ankle injury so Vincent Janssen should be given another chance to get a morale-boosting goal up front while Hueng-min Son could play on the wing after only playing for an hour against West Brom at the weekend.

Pochettino confirmed at his press conference this afternoon that Georges-Kevin Nkoudou will start in attack so the likes of Erik Lamela and Christian Eriksen should get a breather. 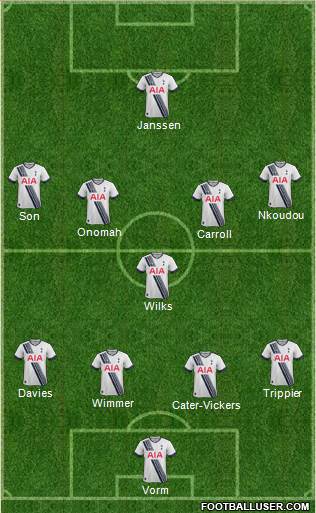