Liverpool take on Plymouth in their FA Cup third round replay at Home Park on Wednesday night. Here is the side I think Jurgen Klopp will select for the game:

Liverpool will be looking to book a date with Wolves in the next stage of the FA Cup when they take on Plymouth in their third round replay at Home Park on Wednesday night. Here is the side I think Jurgen Klopp will select for the game:

Goalkeeper: The Reds boss has confirmed that it will be a ‘different’ side to the one that drew 0-0 at Anfield so we should expect a slightly more experienced team on Wednesday but Klopp has revealed that Loris Karius will start between the sticks.

Defence: Liverpool are unlikely to risk playing Joel Matip until they hear FIFA’s verdict on Friday following a dispute over his availability with the Cameroon FA. It’s a farcical situation but the Reds are better off being cautious than playing Matip without clearance and risking disciplinary action from FIFA.

Joe Gomez is expected to get another start at the back as he continues to build on his match fitness and Klopp may opt to start Dejan Lovren as Lucas Leiva is a major doubt due to a knee injury. The Brazilian missed the draw at Man Utd on Sunday and although he could be back in training tomorrow, Wednesday’s game may just come too soon.

Nathaniel Clyne is set to miss the trip to Plymouth with the rib injury that kept him out of the United clash so Trent Alexander-Arnold should keep his place at right-back while Alberto Moreno should come in for James Milner at left-back.

Midfield: With Klopp expected to name a stronger side than the one that played in the original tie, Jordan Henderson could retain his place in the middle of the park having only recently returned from a heel injury but Adam Lallana is likely to be rested.

Gini Wijnaldum may start to offer more experience in midfield with just one of the youngsters starting. Ovie Ejari will no doubt be hoping for another chance to impress but Kevin Stewart may get the nod.

Attack: Philippe Coutinho got another 30 minutes under his belt at the weekend as he continues to make his comeback from an ankle ligament injury so the Brazilian may be handed his first start since November.

Daniel Sturridge is expected to start up front but Roberto Firmino could get a rest with youngster Sheyi Ojo coming in to the attack. Divock Origi is another option for Klopp while youngster Ben Woodburn will also be hoping to feature with Sadio Mane away at the African Cup of Nations. 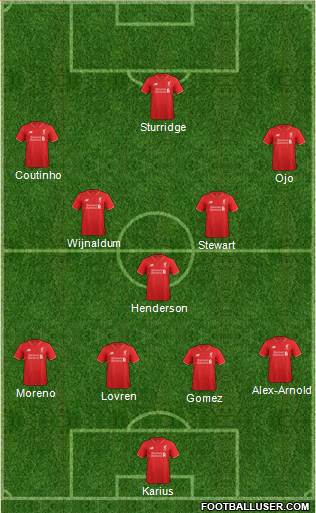