Tottenham Hotspur will be looking to book their place in the fifth round of the FA Cup when they entertain Wycombe Wanderers at White Hart Lane tomorrow afternoon.

Spurs head in to the game off the back of a morale-boosting 2-2 draw at Manchester City last weekend that saw them come from 2-0 down to salvage what could be a vital point in the Premier League title race.

However, thoughts must turn to cup matters this weekend as Mauricio Pochettino’s men welcome Wycombe to north London tomorrow looking to maintain their unbeaten record at the Lane this season.

Tottenham have won each of their last eight home games in all competitions so they’ll be extremely confident of booking their place in the draw for the fifth round having already seen off Aston Villa in the previous stage of the competition.

However, Wycombe could be eyeing a shock as they are flying high in League Two and come in to the match off the back of a 16-game unbeaten run so Pochettino should know not to take this task too lightly.

Tottenham will have to make do without top scorer Harry Harry as he won’t be risked due to a groin injury – although Pochettino has confirmed the problem isn’t serious and Kane should be available to face Sunderland on Tuesday night.

Danny Rose will also be left-out due to a knee injury that he picked up last weekend while Tobby Alderweireld is also nursing a hamstring problem that forced him off against City.

Jan Vertonghen is making good progress in his recovery from an ankle injury but he remains out while Erik Lamela is still working his way back to fitness after struggling to overcome a hip complaint. 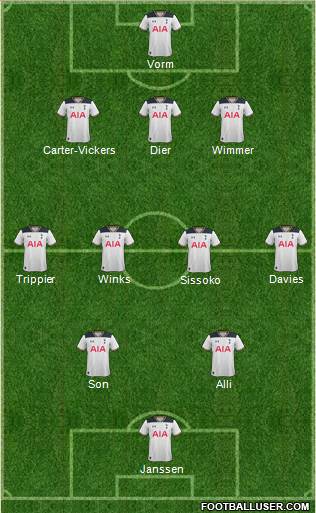 Tottenham are understandably the heavy 1/7 favourites but if you want even more value then I fancy the north Londoners to beat Wycombe 3-0, which is available at odds of 6/1. If you throw in Hueng-min Son as first goalscorer then we get very tempting odds of 14/1.

However, if you want more expert advice on how this game may go, head over to Odinbet….