Manchester United take on Wigan Athletic at Old Trafford on Sunday afternoon. Here is the team I think Jose Mourinho will pick for the game:

Manchester United will be looking to book their place in the fifth round of the FA Cup when they take on Wigan Athletic at Old Trafford on Sunday afternoon.

Goalkeeper: Mourinho has already confirmed that he’ll give David De Gea a rest this weekend with Sergio Romero set to be given a run out in the FA Cup on Sunday.

Defence: There has been no word as to when Eric Bailly will be available again after the Ivory Coast crashed out of the African Cup of Nations earlier this week so we’ll assume the centre-back still isn’t in contention.

Luke Shaw is being tipped to be given a rare chance to impress this weekend after being frozen out by Mourinho in recent months so Marcos Rojo could move in to the middle of defence after playing at left-back against Hull last night.

Chris Smalling could keep his place with Phil Jones given a breather while Antonio Valencia should come back in at right-back after being rested in the EFL Cup semi final.

Midfield: Ander Herrera and Paul Pogba are expected to be given well earned rests on Sunday so Marouane Fellaini could come back in to the side with Wayne Rooney also given a recall in the advanced attacking midfield role.

Mourinho must decide whether to leave Michael Carrick out ahead of Wednesday’s league game with Hull but I have a feeling the experienced midfielder will keep his place this weekend.

Attack: Zlatan Ibrahimovic is expected to get a rest so Marcus Rashford should lead the line up front. Henrikh Mkhitaryan and Juan Mata are pushing for recalls after being named on the bench on Thursday with Jesse Lingard set to make way.

Mourinho has already confirmed that Anthony Martial will come back in to the side after being left out of the squad for United’s last two games and the Portuguese coach has challenged the attacker to stake his claim for a regular spot. 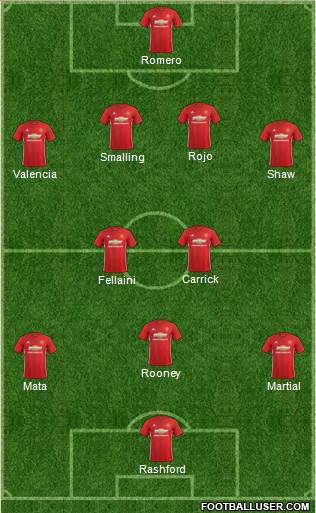 United are understandably the heavy favourites to progress to the next phase, however, it’s always difficult to predict results in the FA Cup, and that’s where Odinbet comes in….

Odinbet is FREE to use, and statistical analysis for games played in world football’s top 12 leagues. Use the filter system to refine which games you should bet on and view the analysis that mathematical system produces to give you the best chance of making money from the Man Utd vs Wigan game.