Arsenal will look to put one foot in the knockout stages when they take on Red Star Belgrade on Thursday night. Here is the side we think Wenger will select

Arsenal will look to put one foot in the knockout stages of the Europa League when they take on Red Star Belgrade on Thursday evening.

Goalkeeper: The boss is expected to stick with his tradition of playing ‘cup keeper’ David Ospina between the sticks in the Europa League so Petr Cech is set to make way.

Defence: Laurent Koscielny is back in training today after recovering from the cramp that forced him off during the closing stages of Saturday’s defeat to Watford but the Frenchman is unlikely to be risked tomorrow night.

Shkodran Mustafi is out for at least another month with a thigh injury while Calum Chambers has suffered a setback in his recovery from a hip problem so we have limited options in defence.

Therefore, Wenger may have little option than to go with Nacho Monreal, Per Mertesacker and Rob Holding in the back three – unless he hands a start to one of our young defenders.

Midfield: Jack Wilshere is expected to get another chance to impress in midfield and he’ll be looking to build on an impressive performance against BATE in our last group stage game.

Aaron Ramsey is back in training and could make the squad after recovering from a tight hamstring but I doubt he’ll be risked from the start while Granit Xhaka should get a rest so Mohamed Elneny may keep his place in midfield.

Sead Kolasinac and Hector Bellerin should get a breather with youngsters Reiss Nelson and Ainsley Maitland-Niles given another start in Europe in the wing-back positions.

Attack: Alexis Sanchez is back in full training after recovering from a muscle issue that kept him out of the Watford game but it remains to be seen whether Wenger will start him or keep the Chilean star back for Sunday’s trip to Everton.

Theo Walcott is expected to be given another chance to impress in attack while Alex Iwobi could keep his place if Wenger opts against starting Mesut Ozil.

Danny Welbeck has been ruled out with a hamstring injury while Alexandre Lacazette should get a rest so Olivier Giroud is expected to lead the line up front tomorrow evening. 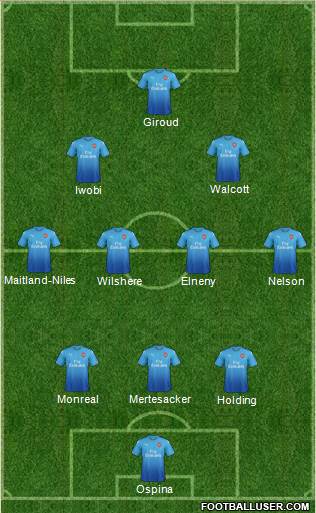