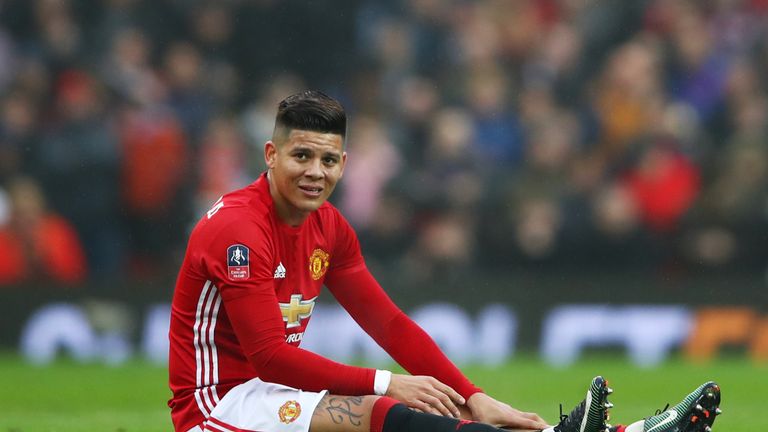 Manchester United defender Marcos Rojo is eyeing a return to the first team next month after confirming he’ll step-up his comeback with a run-out for the reserves today, according to a report by TeamTalk.

Rojo is yet to feature this campaign as he’s been working his way back to full fitness after suffering a serious cruciate knee ligament injury back in April of last season.

The Argentinean international sustained the injury during the closing stages of United’s Champions League win over Anderlecht and he was immediately ruled out for between six-to-nine months.

The 27-year-old has made steady progress during his rehabilitation over the past few months and says he’s not encountered any setbacks since resuming training in October.

Rojo has revealed that he’s due to play in a reserve game this week and if all goes to plan, he’s targetting a first team return when United take on CSKA Moscow in the Champions League on December 5.

He’s quoted as saying by TeamTalk:

“[On Wednesday] I am going to play with the reserves in a friendly match. I feel good. Up until now, I have not had any problems but training is not the same as a match.

“In three weeks we have a Champions League game and if all goes well tomorrow, I could play in that.”

Jose Mourinho confirmed earlier this month that Rojo was getting closer to his first team comeback and the United boss expected to have him available over the Christmas period so it looks like the player is on course to meeting that target.

By the time United face CSKA next month they should have secured qualification to the knockout stages of the Champions League with a positive result against Basel next week so it would be the perfect game to give Rojo a run-out.

His return to fitness will come as a boost for Mourinho as Phil Jones has been struggling to shake-off a niggling thigh injury while Victor Lindelof has failed to force his way in to the first team following his move from Benfica.