Tottenham take on Brighton at Wembley Stadium on Wednesday night. Here is the side we think Mauricio Pochettino will select for the game:

Tottenham will look to close in on the top four with a win when they take on Brighton at Wembley Stadium on Wednesday night.

Goalkeeper: Hugo Lloris is one of the first names on the team sheet and there is no reason to think Pochettino will rest him tomorrow night.

Defence: Spurs will continue to be without Davinson Sanchez as he’ll serve the second of a three-game domestic ban following his sending off against Watford.

Toby Alderweireld has been ruled out until February after suffering a setback in his recovery from a hamstring injury so Pochettino is likely to stick with a back four tomorrow night.

It means Eric Dier should continue alongside Jan Vertonghen in the middle of defence with youngster Juan Foyth offering back-up from the bench.

I think we’ll see Pochettino rotating his full-backs with Danny Rose coming in for Ben Davies on the left side while Serge Aurier should replace Kieran Trippier at right-back.

Midfield: Victor Wanyama returned to light training yesterday as he looks to make his comeback from a serious knee injury but tomorrow’s game will come too soon.

Harry Winks should keep his place in the middle of the park but Pochettino might freshen things up with Moussa Sissoko coming in for Mousa Dembele.

Attack: Erik Lamela is expected to be involved at some point tomorrow as he looks to continue his comeback from a long-term hip injury but I think we’ll see him introduced from the bench.

Spurs were rampant against Stoke at the weekend so Pochettino may stick with the same front four that put five past the Potters with Harry Kane once again leading the line up front.

Hueng-min Son has found some form in recent games so he deserves to keep his place with Christian Eriksen and Dele Alli also once again starting in the attack. 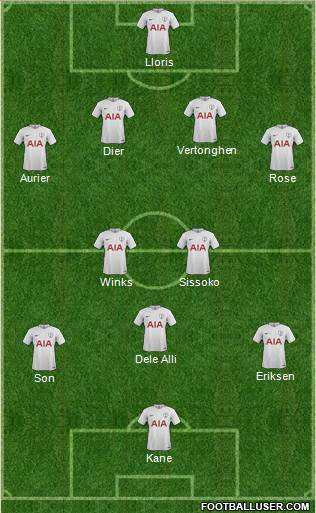