Tottenham take on AFC Wimbledon at Wembley on Sunday afternoon. Here is the side we think Mauricio Pochettino will select for the game:

Tottenham will look to book their place in the fourth round of the FA Cup when they take on AFC Wimbledon at Wembley on Sunday afternoon.

Goalkeeper: Michel Vorm should get a run-out in the FA Cup with Hugo Lloris given a well-earned rest.

Defence: Pochettino is expected to heavily rotate his squad after playing two games in three days this week so many of his first team regulars will make way.

Danny Rose has been ruled out for the foreseeable future after aggravating his troublesome knee problem so youngster Kyle Walker-Peters could play at left-back with Ben Davies rested.

Kieran Trippier should be recalled on the opposite side with Serge Aurier dropping out while Jan Vertonghen should be rested meaning a rare run-out for youngster Juan Foyth.

Toby Alderweireld is still nursing a long-term hamstring injury so Pochettino could retain Davinson Sanchez at the back as he’s only recently returned from suspension.

Midfield: Pochettino will freshen things up in the middle of the park so Harry Winks is expected to get a recall in midfield after being named on the bench for the last three games.

Mousa Dembele is also in-line for a recall after recovering from a minor hip problem while we could see Victor Wanyama make his first start since August as he steps-up his recovery from a serious knee injury.

Eric Dier and Moussa Sissoko are among the names that could be rested after starting during the draw with West Ham on Thursday night.

Attack: Harry Kane is expected to be given a breather while Pochettino should also take the opportunity to rest Christian Eriksen and Dele Alli as they’ve featured heavily over the festive period.

Heung-min Son is another player due for a rest so he could make way despite scoring a stunner against West Ham with Erik Lamela set for a recall in attack.

Youngster Georges-Kevin Nkoudou could be given a chance to impress on the left wing while we should see Fernando Llorente come in to lead the line up front in Kane’s absence.

Youngsters such as Anthony Georgiou and Kazaiah Sterling could be named on the bench and would hope to feature at some point. 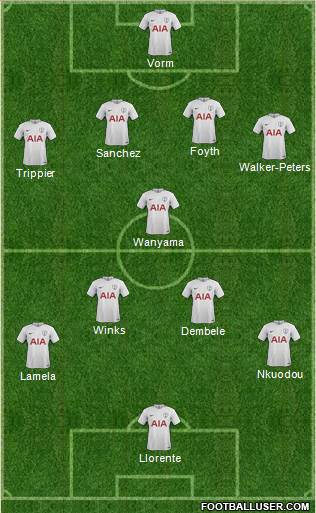