Tottenham take on Arsenal at Wembley on Saturday lunchtime. Here is the side we think Mauricio Pochettino will select for the game:

Tottenham Hotspur will look to climb in to the top four with a win when they take on Arsenal at Wembley on Saturday lunchtime.

Goalkeeper: Hugo Lloris was rested for the FA Cup win over Newport County last night so the skipper is set for a recall this weekend with Michel Vorm dropping out.

Defence: Pochettino is expected to make plenty of changes to his defence with Jan Vertonghen set to come back in to the side in place of youngster Juan Foyth.

Kieran Trippier should also get a recall at right back as Serge Aurier makes way while Ben Davies is expected to replace Danny Rose on the opposite flank.

Toby Alderweireld made a successful return to the side after starting his first game since November 1st last night but it remains to be seen whether Pochettino will risk him again so soon.

Davinson Sanchez was rested against Newport in the cup so I suspect the Colombian international will be recalled with Alderweireld given a chance to recover.

Midfield: Eric Dier and Mousa Dembele will be fresh after being given a breather in midweek so they should get recalls with Harry Winks and Victor Wanyama making way.

Attack: We should see plenty of changes in attack as Harry Kane, Dele Alli and Christian Eriksen are all set for recalls to the starting eleven after being rested in the FA Cup last night.

Fernando Llorente’s woes in front of goal continued against Newport so he’s certain to make way against Arsenal while Erik Lamela and Moussa Sissoko should also drop to the bench this weekend.

Pochettino has confirmed Lucas Moura is in contention to make his debut after building on his fitness in training this week following his deadline day move from Paris Saint-Germain.

However, I don’t think Tottenham will throw the Brazilian international straight in to action in a huge North London Derby so Heung-min Son could keep his place in attack. 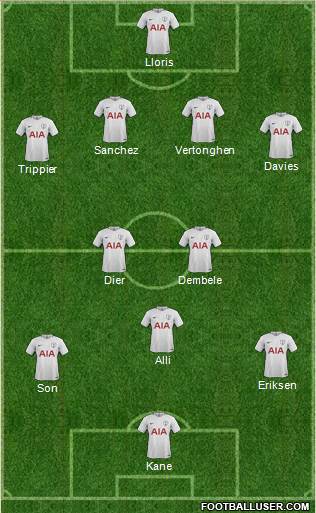