Tottenham take on Juventus in the first leg of their Champions League tie tomorrow night. Here is the side we think Pochettino will select for the game:

Tottenham will be looking to bring home a positive result from the first leg of their Champions League last-16 tie with Juventus tomorrow night.

Goalkeeper: Hugo Lloris has missed just one of Tottenham’s Champions League games so far this campaign and there is no way the skipper will be left out tomorrow night unless he picks up a late injury.

Defence: Pochettino has decided not to risk Toby Alderweireld as the Belgian international hasn’t travelled to Turin due to a lack of match fitness having only recently returned from a long-term hamstring injury.

Therefore, Davinson Sanchez will line-up alongside Jan Vertonghen in the middle of defence against Juve with Juan Foyth offering an option from the bench.

It will be interesting to see what Poch does with his full-backs as he’s regularly rotating them this season. Danny Rose is pushing for a recall at left-back but I think Ben Davies will keep his place.

Kieran Trippier is the regular right-back in the Premier League but Serge Aurier has started five of Tottenham’s six Champions League games so I think he may come in tomorrow night.

Midfield: This is going to be an extremely difficult game that Spurs won’t want to lose so I think we might see Pochettino tweak his formation and play Eric Dier sitting in front of the defence with Mousa Dembele and Victor Wanyama playing ahead in a midfield three.

Dier can drop back to make a back five if needed when Spurs aren’t in possession and Wanyama will offer extra security in the middle of the park against the Serie A champions.

Attack: The extra man in midfield means one of Tottenham’s attackers will have to make way and I think Heung-min Son is the man most likely to drop to the bench – but he’ll be a very useful player to have available if needed.

That means Dele Alli and Christian Eriksen will be the players to support Harry Kane and the trio will be desperate to try and grab at least one away goal to take back to London.

Lucas Moura will offer an option from the bench as the Brazilian international will be hoping to make his debut following his move from PSG last month. 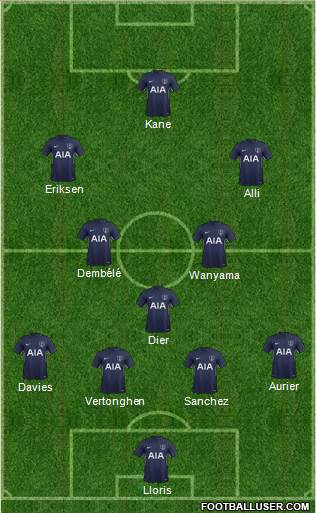