Arsenal take on Manchester City for the second time in five days at the Emirates tomorrow night. Here is the side we think Arsene Wenger will select

Arsenal will look to bounce back from their Carabao Cup disappointment when we take on Manchester City for the second time in five days at the Emirates tomorrow night.

Goalkeeper: Petr Cech has sat out our last three games with David Ospina playing in the Europa League and League Cup matches but I expect Cech to be recalled for this Premier League game tomorrow.

Defence: Wenger went with a back three/five in the Carabao Cup final on Sunday but we can hardly claim it worked as City eased to a 3-0 victory at Wembley.

We have to win this game if we’re to stand any chance of finishing fourth so I expect the boss to revert to a back four in order to get one more attacker on the pitch.

Calum Chambers is the man most likely to make way as Shkodran Mustafi will probably keep his place alongside Laurent Koscielny despite his horrendous error at the weekend.

Hector Bellerin is pretty-much our only option at right-back while Sead Kolasinac is due a recall at left-back with Nacho Monreal ruled out with a back injury that he picked up on Sunday.

Midfield: Granit Xhaka produced another woeful performance at the weekend but I just don’t see Wenger dropping the Switzerland international any time soon. He hasn’t dropped him all season so why will he start now?

New Customers can get Man City at an enhanced 25/1or Arsenal at an enhanced 50/1. Max Stake £1. Winnings paid in free bets. Full T&Cs Apply. 18+|Gamble Aware.

Aaron Ramsey came through the game unscathed after returning from a groin injury so he should keep his place in midfield while Jack Wilshere should also get another chance to impress.

Attack: Henrikh Mkhitaryan is set for a recall after being cup-tied for the League Cup final and I expect he’ll come back in alongside Mesut Ozil in attack. We’re going to need a lot more from our playmakers than we saw on Sunday, that’s for sure.

Pierre-Emerick Aubameyang will be disappointed to have missed a great chance at 0-0 against City but the Gabon international will get an opportunity to make amends as he should once again lead the line up front tomorrow night.

Alexandre Lacazette is still recovering from knee surgery while Danny Welbeck will be named on the bench as his form has been poor recently and his confidence looks rock bottom.

Alex Iwobi will also be an option from the bench if needed. 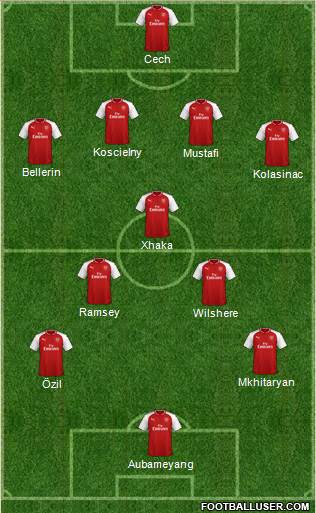