Manchester United take on Tottenham at Wembley on Saturday evening. Here is the team I think Jose Mourinho will pick for the game:

Manchester United will look to book their place in the FA Cup final when they take on Tottenham at Wembley on Saturday evening.

Goalkeeper: David De Gea is certain to keep his place in goal as he’s one of the best keepers in the world and probably the first name on the team sheet.

Defence: Mourinho rotated is squad for the 2-0 win at Bournemouth on Wednesday night so we should see Matteo Darmian and Luke Shaw making way after getting rare starts at Dean Court.

That would pave the way for Antonio Valencia and Ashley Young to be recalled to the back four while Eric Bailly could replace Phil Jones alongside Chris Smalling in the middle of defence.

Midfield: Paul Pogba responded to criticism from Mourinho last week but putting in a much-improved display against Bournemouth so I expect the French international to keep his place in midfield.

Nemanja Matic is certain to come back in after being given a well-earned breather last night so Marouane Fellaini should make way with Ander Herrera keeping his place in a midfield three.

Attack: Alexis Sanchez was left out of the starting eleven against the Cherries after a string of inconsistent performances but the Chilean international has an excellent record at Wembley from his time at Arsenal and I expect him to be recalled against Spurs.

Romelu Lukaku is also certain to come back in to the starting eleven after scoring off the bench following a rare rest against Bournemouth so Marcus Rashford is set to drop out.

Anthony Martial is the man most likely to make way for Sanchez’s return as Jesse Lingard could keep his place in attack – although Juan Mata is also pushing for a recall so Mourinho has plenty of options. 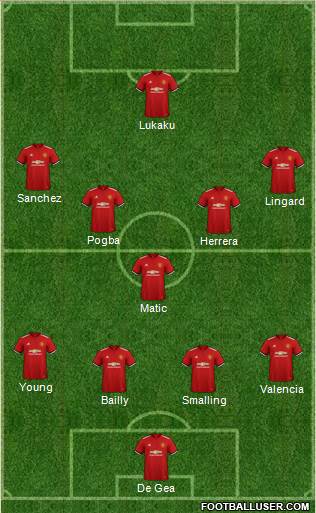