Liverpool take on Brighton at Anfield on Saturday evening. Here is the team we think Jurgen Klopp will select:

Liverpool will look to build on their impressive start to the season when they take on Brighton at Anfield on Saturday evening. Here is the team we think Jurgen Klopp will select:

Goalkeeper: Alisson Becker has looked assured between the sticks so far and has kept consecutive clean sheets but it’s his distribution with the ball that’s really caught the eye. No doubt he’ll keep his place this weekend with Simon Mignolet set to be his back-up this season as Loris Karius is expected to join Besiktas.

Defence: Joel Matip returned to the bench last week during the win at Crystal Palace after recovering from a hip injury and the defender will have to make-do with a place among the substitutes once again on Saturday.

Joe Gomez has been excellent so far this season and fully deserves to keep his place alongside Virgil van Dijk at the heart of the back four while Andrew Robertson will no doubt retain his place at left-back.

Trent Alexander-Arnold appears to have made the right-back berth his own with some superb performances so I expect Nathaniel Clyne will once again have to fight for a place on the bench.

Midfield: Fabinho was surprisingly left out of the squad against Palace but he’s built-up his fitness in training this week and Klopp may feel this is the perfect home game to hand him his full debut.

Jordan Henderson is also pushing for a recall to the starting eleven after being a sub for the first two matches. The Reds boss knows he needs to rotate his players to keep them fresh so although Gini Wijnaldum and James Milner have impressed so far, a home clash with Brighton might be a good opportunity to mix things up.

Summer signing Naby Keita has been sensational since arriving from RB Leipzig so he could keep his place but Adam Lallana may have to make-do with a place on the bench while Alex Oxlade-Chamberlain is unavailable due to a long-term knee injury.

Attack: If Klopp wants to freshen things up in attack then he could hand Xhedran Shaqiri his full debut while Daniel Sturridge is also pushing for a recall to the starting eleven.

However, I think Klopp will stick with his favoured front three – which is one of the most deadly in world football – with Mohamed Salah keeping his place in attack against Brighton.

Roberto Firmino should also continue to lead the line up front and it’s impossible to leave Sadio Mane out right now as he’s scored three goals in his two games so far this campaign. 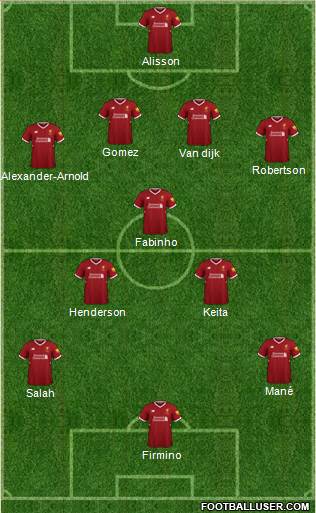