Arsenal welcome West Ham to the Emirates Stadium on Saturday afternoon. Here is the side Gooner Mac thinks Unai Emery will select for the game: Arsenal will look to bounce back from a disappointing start to the new season when they welcome West Ham to the Emirates Stadium on Saturday afternoon. Here is the side Gooner Mac thinks Unai Emery will select for the game:

Goalkeeper: Petr Cech appears to have been installed as Arsenal’s number one this season with summer signing Bernd Leno being left on the bench. Cech has conceded five goals in his two appearances so far but he’s been left badly exposed by the players in front of him so I don’t think Emery will make any changes between the sticks this weekend.

Defence: Our defence was shocking during the first half at Stamford Bridge but unfortunately it was arguably our strongest back four available so Emery doesn’t have much scope to improve the personnel on Saturday.

Laurent Koscielny has stepped-up his rehabilitation from Achilles surgery after returning to light training but he’s still a long way from being available so Sokratis will continue alongside Shkodran Mustafi against West Ham.

Sead Kolasinac is out until October with a knee injury but thankfully Nacho Monreal came through the Chelsea game unscathed so he should once again start at left-back.  Hector Bellerin was exposed defensively last weekend so there are calls for Stephan Lichtsteiner to come in but I think Emery will stick with the young Spaniard.

Midfield: We could see a change in midfield as Granit Xhaka was subbed at half-time against Chelsea after another disappointing display. He’s useful when we’re in possession but he’s become a liability when we don’t have the ball so he could find himself on the bench this weekend.

Lucas Torreira could therefore come in to make his full debut after replacing Xhaka last time out and the Uruguayan could form a new-look partnership alongside Matteo Guendouzi. The young Frenchman has been a revelation since arriving in the summer and has probably been our best player in both games this season so he should keep his place on Saturday.

Attack: Mesut Ozil was hooked early in the second half against Chelsea after a poor showing and Emery isn’t taking any prisoners so I wouldn’t be surprised if the German international finds himself on the bench against the Hammers.

Aaron Ramsey is pushing for a recall and he may be given another chance in the number 10 role while Alex Iwobi deserves to keep his place after a hard-working performance at Stamford Bridge that saw him get on the score-sheet.

Henrikh Mkhitaryan was also among the goals against Chelsea so I expect he’ll keep his place in attack but it will be interesting to see what Emery does up front.

Fans are calling for Alexandre Lacazette to start with Pierre-Emerick Aubameyang but Emery suggested at his press conference today that he’s going to stick with playing one or the other for now. Aubameyang has missed a few chances so far this season but I still think he’ll keep his place with Laca having to make-do with a place on the bench. 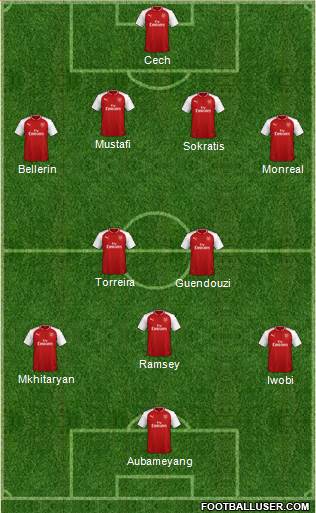