Chelsea welcome Frank Lampard’s Derby County to Stamford Bridge on Wednesday night. Here is the side I think Maurizio Sarri will select for the game:

Chelsea will be looking to book their place in the quarter-finals of the Carabao Cup when they welcome Frank Lampard’s Derby County to Stamford Bridge on Wednesday night. Here is the side I think Maurizio Sarri will select for the game:

Goalkeeper: Sarri is expected to take the opportunity to give number one goalkeeper Kepa Arrizabalaga a rest so Willy Caballero should get a rare run out in goal tomorrow night.

Defence: We should also see the Blues boss making plenty of changes at the back with Davide Zappacosta set to replace Cesar Azpilicueta at right-back while Emerson Palmeiri should come in for Marcos Alonso at left-back.

Andreas Christensen and Gary Cahill are also expected to be recalled in the middle of the back four with first choice pairing David Luiz and Antonio Rudiger given a breather ahead of Sunday’s Premier League clash with Crystal Palace.

Midfield: I also expect we’ll see rotation in midfield with Jorginho and N’Golo Kante given well earned rests but Ross Barkley could keep his place as he’s in fine form and Sarri may want to help him build some momentum after so long on the sidelines.

Cesc Fabregas is set for a recall in the deep lying playmaker position against Derby while Mateo Kovacic should come back in to the side after being named on the bench for the weekend win over Burnley.

Attack: Chelsea are set to be without Eden Hazard once again as the Belgian international is still nursing a back injury that’s seen him miss the last two games. However, the Blues are confident Hazard will be fit to return against Palace at the weekend.

Pedro is a doubt for the League Cup clash after being forced off with a stomach problem on Sunday so he might not be risked while Willian should be given a rest. Therefore, Victor Moses may get a rare chance to impress after falling out-of-favour this season.

Ruben Loftus-Cheek should get a well-earned start having scored four goals in his last two appearances but Olivier Giroud is a doubt due to muscle fatigue so Alvaro Morata may keep his place up front.

If Giroud is passed fit then he could be recalled having been named on the bench against Burnley but Sarri may give the Frenchman more time to recover and save him for the Palace game on Sunday. 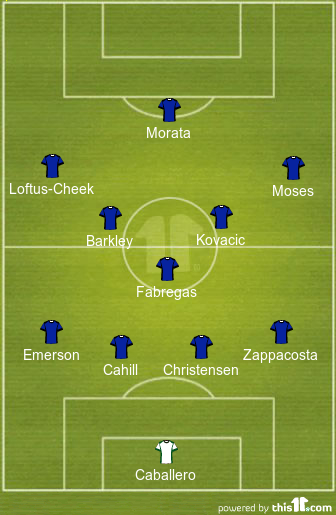