Chelsea take on Nottingham Forest at Stamford Bridge on Saturday afternoon. Here is the side I think Maurizio Sarri will select for the game:

Chelsea will be looking to book their place in the fourth round of the FA Cup when they take on Nottingham Forest at Stamford Bridge on Saturday afternoon. Here is the side I think Maurizio Sarri will select for the game:

Goalkeeper: Sarri is expected to rotate his goalkeepers for this FA Cup clash so Willy Caballero could be given a rare run out with Kepa Arrizabalaga rested.

Defence: The Chelsea boss is set to make wholesale changes at the back as he looks to give his key men a rest ahead of their Carabao Cup semi-final first leg against Tottenham next week. Therefore, Davide Zappacosta should come in for Cesar Azpilicueta at right-back while Emerson Palmeiri will replace Marcos Alonso on the left.

Andreas Christensen is also set for a recall in place of David Luiz with the Brazilian given a breather. Gary Cahill would usually also come back in to the side but Sarri may opt to give Ethan Ampadu a chance as Cahill is expected to seal a loan move away from the Blues this month.

Midfield: Cesc Fabregas is also being strongly linked with a move and appeared to say his goodbyes after the draw with Southampton on Wednesday night but the Spaniard is still being tipped to start against Forest this weekend with Jorginho rested.

N’Golo Kante should also be given the night off ahead of the Spurs clash with Mateo Kovacic recalled in midfield after recovering from illness while Ross Barkley could keep his place in the middle of the park.

Attack: Sarri has seen his attack decimated in recent weeks so he has very few options to rotate this weekend. Willian would have started but the Brazilian was forced off with a hamstring injury against Southampton. Sarri is confident it’s not serious but it will be enough to see him miss out against Forest.

Pedro is also a week away from returning to training following a hamstring problem while Callum Hudson-Odoi remains a major doubt due to his own hamstring complaint so Sarri may be forced to start Eden Hazard in attack. Ideally the Belgian international would be rested but Sarri’s hands may be tied if Hudson-Odoi is ruled out.

Olivier Giroud is still on the sidelines with an ankle injury and while Chelsea are hoping he’ll be back in training over the next week, he won’t be fit this weekend so Alvaro Morata is expected to lead the line up front.

Ruben Loftus-Cheek is fit and it expected to be given a chance to impress on Saturday. His preferred position is in the middle but with Chelsea’s problems in attack, the youngster may be deployed on the wing. 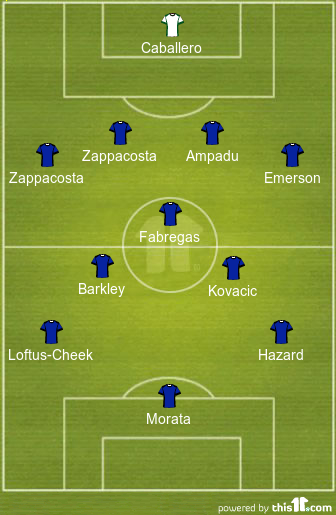