Liverpool take on Wolves in the third round of the FA Cup at Molineux on Monday night. Here is the team we think Jurgen Klopp will select:

Liverpool will be looking to bounce back from their defeat to Man City when they take on Wolves in the third round of the FA Cup at Molineux on Monday night. Here is the team we think Jurgen Klopp will select:

Goalkeeper: Klopp has already confirmed he will rest number one goalkeeper Alisson Becker with Simon Mignolet being given a chance to impress between the sticks tomorrow.

Defence: The Liverpool boss is expected to make plenty of changes in defence and Alberto Moreno will come in for Andrew Robertson at left-back but his options at centre-back are limited with Joel Matip and Joe Gomez still on the sidelines.

Klopp will be keen to rest Virgil van Dijk and he’s hinted youngster Ki-Jana Hoever could be handed his debut. The 16-year-old is predominantly a right-back but he’s also capable of playing in the middle so Klopp may put him alongside the experience of Dejan Lovren.

James Milner could then start at right-back with Trent Alexander-Arnold rested. Rafael Camacho and Conor Masterson are other options in defence and they may be in the squad but Klopp will probably be reluctant to start two youngsters in the back four.

Midfield: Fabinho is expected to be recalled in the holding role after being named on the bench for the defeat at Man City while Naby Keita should also come back in to the starting eleven after also being among the subs at the Etihad Stadium.

Jordan Henderson and Georginio Wijnaldum should get a breather while Milner could move to right-back so Adam Lallana is expected to be given a run-out. Youngster Curtis Jones is another option if Klopp wants to give the youngster a chance to impress.

Attack: I would be shocked if we saw any of Liverpool’s star forwards so Mohamed Salah, Sadio Mane and Roberto Firmino are likely to be rested. Klopp may have one of his big boys on the bench just in-case an injection of world class quality is needed but none of the trio are likely to start against Wolves.

Xherdan Shaqiri should come back in to the side while Daniel Sturridge is expected to lead the line up front for Liverpool. Divock Origi is also pushing for a recall so the Belgian could be deployed from the wing. 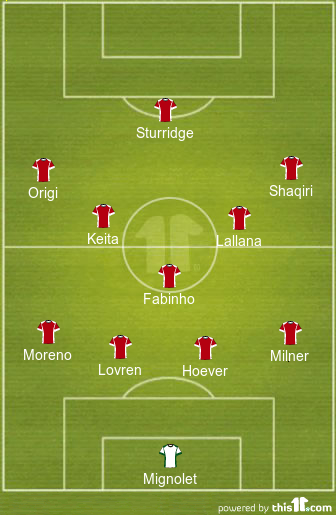