Tottenham take on Borussia Dortmund in their Champions League last-16 clash on Wednesday. Here is the side we think Mauricio Pochettino will select

Tottenham will look to secure a first leg advantage when they take on Borussia Dortmund in their Champions League last-16 clash on Wednesday night. Here is the side we think Mauricio Pochettino will select for the game:

Goalkeeper: I don’t think there is much debate over who’ll start in goal as Hugo Lloris is almost certain to keep his place between the sticks with Paulo Gazzaniga having to make-do with a place on the bench.

Defence: Tottenham have been dealt a blow with the news that Danny Rose isn’t fit to start tomorrow night after suffering a shin problem against Leicester at the weekend. Pochettino is hopeful the full-back may make the bench but with Ben Davies certain to miss out through injury, Spurs have a void to fill at left-back.

Kyle Walker-Peters is an option but I expect Jan Vertonghen to move across to the left side of the back four with Toby Alderweireld recalled alongside Davinson Sanchez in the middle of the defence. Pochettino may give Kieran Trippier a breather with Serge Aurier pushing for a recall at right-back.

Midfield: Eric Dier is back in contention after returning to full training having missed the win over Leicester with a virus. The England international could be recalled to line-up in a midfield three alongside Harry Winks and Moussa Sissoko.

Victor Wanyama is still not 100 per cent match fit yet so a place on the bench is the best he can hope for while Oliver Skipp will drop out after starting against Leicester on Sunday.

Attack: Harry Kane is still working his way back to full fitness following an ankle ligament injury so he won’t be available to face Dortmund tomorrow night. Fernando Llorente has done reasonably well in his absence but I think the Tottenham boss will go with Heung-min Son through the middle tomorrow with the Spaniard on the bench.

Dele Alli is also not ready to return just yet as the midfielder continues to overcoming a hamstring problem but Christian Eriksen is fit and available for selection so he’s expected to keep his place in the side.

Erik Lamela is pushing for a recall to the squad after recovering from a back injury that kept him out of the Leicester game but I think he’ll be named on the bench with Lucas Moura keeping his place in the Tottenham attack. 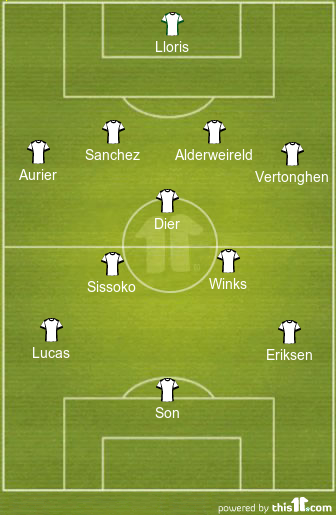