Chelsea will be desperate to beat West Ham at Stamford Bridge on Monday night. Here is the side I think Maurizio Sarri will select for the game:

Chelsea will be desperate to beat West Ham at Stamford Bridge on Monday night in order to climb up to third place in the Premier League table. Here is the side I think Maurizio Sarri will select for the game:

Goalkeeper: I don’t think there can be too much debate over who will start in goal as summer signing Kepa Arrizabalaga is almost certain to keep his place with Willy Caballero having to make-do with a place among the substitutes.

Defence: Chelsea are expected to make changes in defence as Sarri looks to freshen things up ahead of their Europa League quarter-final so Antonio Rudiger is set for a recall. Andreas Christensen is the man most likely to make-way with David Luiz keeping his place in the back four.

Cesar Azpilicueta should once again start at right-back but Marcos Alonso is pushing for a recall on the opposite side of the defence after recovering from a hamstring problem so Emerson Palmeiri could drop out.

Midfield: Jorginho is expected to keep his place in the deep lying midfield position as the Italian international is crucial to ‘Sarri-ball’ while N’Golo Kante should also once again start in the middle of the park.

Ruben Loftus-Cheek will be hoping he did enough to keep his place after scoring an excellent goal during the win over Brighton last week but the England international is carrying an on-going back issue so he may not be risked. Mateo Kovacic is an option for Chelsea but I think Ross Barkley might get the nod ahead of the on-loan Real Madrid midfielder.

Attack: Eden Hazard was back on form last time out during the comfortable win over Brighton and the Belgian international is expected to start in attack against West Ham tomorrow night – although Sarri may take him off if Chelsea are winning in the second half to protect him for Thursday night.

Olivier Giroud impressed against Brighton last time out having scored the opening goal so he may have done enough to retain his place up front meaning Gonzalo Higuain may have to settle for a place among the substitutes.

Chelsea fans are desperate for Callum Hudson-Odoi to get a run of games after he impressed during his first Premier League start last week but Sarri is being tipped to drop the teenager back to the bench tomorrow. There is a lot of pressure on the 18-year-old so the Blues boss will want to protect the player and carefully manage his development, as well as expectations.

Willian is pushing for a recall in attack but Pedro is available again after recovering from a muscle issues that kept him out of the Brighton game so he may get the nod to replace Hudson-Odoi. 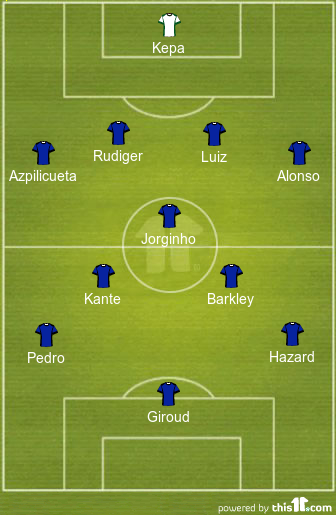