Chelsea take on Slavia Prague in the first leg of their Europa League quarter final. Here is the side I think Maurizio Sarri will select for the game:

Chelsea will be looking to bring home a positive result from the first leg of their Europa League quarter final with Slavia Prague this evening. Here is the side I think Maurizio Sarri will select for the game:

Goalkeeper: Sarri has started his number one goalkeeper in 8 out of Chelsea’s 10 Europa League games so far this season so it’s safe to assume Kepa Arrizabalaga will retain his place ahead of Willy Caballero this evening.

Defence: Chelsea are expected to make a couple of changes in defence as Sarri looks to keep his players fresh. Marcos Alonso is pushing for a recall after recovering from a knock so he could replace Emerson Palmeiri at left-back.

Andreas Christensen is expected to come-in to the back four with David Luiz possibly the man given a rest. That means Antonio Rudiger would keep his place to start alongside Christensen while Cesar Azpilicueta should once again start at right-back.

Midfield: Sarri has confirmed he will rest some of his key men ahead of Sunday’s crucial Premier League clash with Liverpool at Anfield so N’Golo Kante could be given a breather this evening.

Ruben Loftus-Cheek has started the last two Chelsea games so he may be rested with Ross Barkley and Mateo Kovacic pushing for recalls in the middle of the park.

However, I think Chelsea will retain at least one midfielder with Jorginho keeping his place in the deep lying midfield role as the Italian international is crucial to ‘Sarri-ball’.

Attack: Sarri hinted at his press conference yesterday that Eden Hazard would be rested for the game after his excellent performance during Chelsea’s win over West Ham on Monday night so I expect the Belgian international to drop to the bench.

Gonzalo Higuain could also make way while youngster Callum Hudson-Odoi is likely to drop out after starting in Chelsea’s last two matches against Brighton and West Ham. The teenage star performed well in both games but it might be too much to ask for him to start three matches in quick succession.

Olivier Giroud is expected to come-in to lead the line up front for Chelsea while Pedro and Willian are also pushing for recalls so the west Londoners will still be able to field a strong attack against Prague despite making three changes. 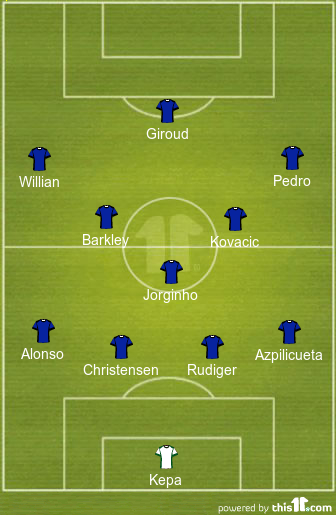