Chelsea take on Valencia in the Champions League at Stamford Bridge on Tuesday night. Here is the team we expect Frank Lampard to select

Chelsea begin their Champions League group stage campaign when they take on Valencia at Stamford Bridge on Tuesday night. Here is the team we expect Frank Lampard to select for the game:

Goalkeeper: I don’t see Lampard rotating his goalkeepers in the Champions League so Kepa Arrizabalaga should keep his place between the sticks with Willy Caballero once again on the bench.

Defence: Chelsea have been dealt a fresh blow with the news that Antonio Rudiger has been ruled out after aggravating a groin injury against Wolves at the weekend. The German defender has only just returned to action from a serious knee injury so Lampard will hope this latest issue isn’t serious.

The Blues boss went with a back three/five against Wolves so he could stick with that system tomorrow night with Andreas Christensen keeping his place. Fikayo Tomori will hope he’s also done enough to warrant another start after scoring a stunner on Saturday while Kurt Zouma could come in for Rudiger if Lampard persists with three centre-backs.

Reece James will step-up his return from injury with another run out for the U23s so Cesar Azpilicueta should continue on the right while Marcos Alonso will start on the left as Emerson has been ruled out with a hamstring injury.

Midfield: Chelsea have been dealt another blow as N’Golo Kante isn’t deemed fit enough to make his return to action just yet despite taking part in full training following a foot injury that’s kept him out of the last three games.

Therefore, Mateo Kovacic should continue alongside Jorginho in the middle of the park with Ross Barkley having to make do with a place on the bench. Ruben Loftus-Cheek remains out with a long-term Achilles injury.

Attack: Tammy Abraham will be assessed ahead of the game after complaining of muscle tightness after scoring his hat-trick at the weekend. Lampard hopes it was just cramp or fatigue but the Chelsea boss may feel it’s too much of a risk to start the in-form striker so Olivier Giroud could be in-line for a recall up front.

Mason Mount continued his stunning start to the season with another goal against Wolves but the youngster has played a lot of football already and Lampard may want to protect him by giving him a rest. Therefore, Christian Pulisic could be recalled to play on the left side of the Chelsea attack after he was named on the bench at the weekend.

Willian will hope to keep his place but Pedro is available again so Lampard may freshen things up in attack. Callum Hudson-Odoi is close to making his return from injury but he’ll continue to work on his match fitness with the U23s for now. 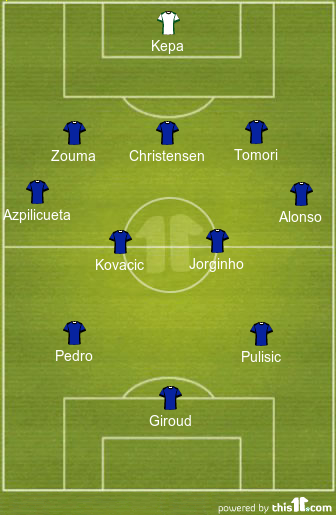