Tottenham take on Southampton in the Premier League on Saturday afternoon. Here is the side we think Mauricio Pochettino will select for the game:

Tottenham take on Southampton in the Premier League on Saturday afternoon. Here is the side we think Mauricio Pochettino will select for the game:

Goalkeeper: Hugo Lloris missed the defeat at Leicester City last weekend after his wife gave birth on the eve of the game and he was on the bench for Tuesday night’s Carabao Cup defeat to Colchester United. However, the Frenchman is expected to replace Pablo Gazzaniga between the sticks this weekend.

Defence: Pochettino will make wholesale changes to his defence with Danny Rose set to be recalled in place of Ben Davies at left-back while Serge Aurier could come in for Kyle Walker-Peters at right-back after he was rested in midweek.

Jan Vertonghen and Toby Alderweireld are also in-line for recalls to the starting eleven after being rested against Colchester so Davinson Sanchez will drop to the bench. Youngster Japhet Tanganga was impressive on his debut but he’s still expected to drop out against Southampton.

Juan Foyth is back in full training after an ankle problem and was on the bench on Tuesday but I don’t think Pochettino will throw him into action just yet while Ryan Sessegnon is still working his way back to full fitness following a hamstring injury.

Midfield: Tottenham are expected to recall Harry Winks after he was given the night off in the League Cup while big-money summer signing Tanguy Ndombele could also come back into the starting eleven after not featuring in midweek.

Moussa Sissoko was a substitute against Colchester so he’ll be pushing for a recall on Saturday but I think Pochettino may go with the more attacking option of playing Christian Eriksen in a midfield trio alongside Winks and Ndombele.

Eric Dier, Oliver Skipp and Victor Wanyama will drop out after starting in the Carabao Cup while Giovani Lo Celso remains on the sidelines with a groin injury that’s expected to keep him out until November.

Attack: Dele Alli still looked rusty after starting against Colchester so I expect he’ll make way this weekend while Lucas Moura may also drop out after failing to make a real impact in the League Cup defeat.

Heung-min Son and Erik Lamela are pushing to be recalled in attack while Harry Kane is certain to come back in for Tottenham to lead the line up front after being given a breather in midweek. Youngster Troy Parrott has a big future ahead of him but he will drop out after being given a start in the cup. 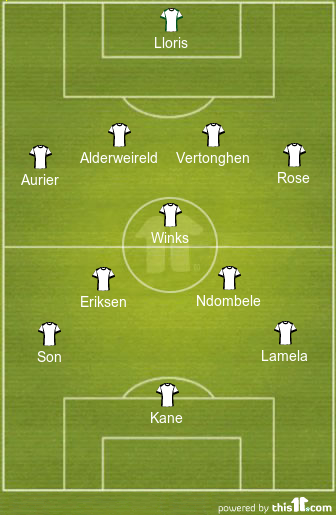