Chelsea take on Lille in the group stages of the Champions League on Wednesday night. Here is the team we expect Frank Lampard to select for the game:

Chelsea take on Lille in the group stages of the Champions League on Wednesday night. Here is the team we expect Frank Lampard to select for the game:

Goalkeeper: There isn’t any point spending too much time deliberating over who’ll start in goal as Kepa Arrizabalaga will keep his place between the sticks with Willy Caballero once again named on the bench.

Defence: Lampard is expected to stick with the same back four that kept a clean sheet during the 2-0 win over Brighton at the weekend as Antonio Rudiger remains out with a groin injury that’s kept him out of the last two games.

Kurt Zouma is back in contention after recovering from illness which kept him out of the Brighton game but I think Chelsea will persist with Fikayo Tomori alongside Andreas Christensen at the heart of defence.

Reece James is pushing for a recall at right-back after making an impressive comeback from injury in the Carabao Cup last week but I think Lampard will stick with Cesar Azpilicueta at right-back tomorrow night. Emerson Palmieri remains out with a thigh injury so Marcos Alonso should continue at left-back.

Midfield: N’Golo Kante will be given a late fitness test after returning to full training having missed the win over Brighton with a thigh injury. However, I don’t think Chelsea will take any unnecessary risks with the Frenchman so I think Kante will be named on the bench against Lille.

Jorginho is certain to keep his place at the heart of the Chelsea midfield and if Kante isn’t risked then we could see Mateo Kovacic being recalled with Ross Barkley the man to drop out after he started at the weekend.

Ruben Loftus-Cheek is stepping-up his recovery from an Achilles injury but he remains out tomorrow night.

Attack: Olivier Giroud is back in contention after recovering from illness while Michy Batshuayi is hoping to feature but I think Chelsea will go with their number one striker as they need to get their first points on the board after losing at home to Valencia last time out. Therefore, Tammy Abraham should continue to lead the line up front.

Mason Mount has overcome a minor knock and started against Brighton at the weekend so he should retain his place in the attacking midfield position after cementing himself as a regular under Lampard this season.

Willian got himself on the score-sheet on Saturday so he may keep his place in the team. Callum Hudson-Odoi is a serious option for Lampard after making a successful return to full fitness so he could replace Pedro in attack. Christian Pulisic appears to have fallen down the pecking order so he’s expected to settle for a place on the bench. 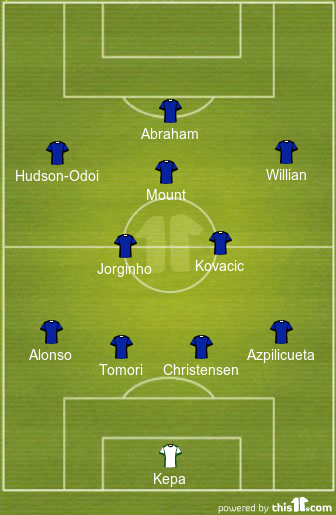