Tottenham take on Brighton at the Amex Stadium on Saturday. Here is the side we think Mauricio Pochettino will select for the game:

Tottenham will look to bounce back from their Bayern Munich humiliation when they take on Brighton at the Amex Stadium on Saturday. Here is the side we think Mauricio Pochettino will select for the game:

Goalkeeper: Hugo Lloris conceded seven goals in midweek and the Frenchman made a mistake against Southampton last weekend so his position could be under threat with Paulo Gazzaniga pushing for a recall. However, I still think Poch will stick by his No.1.

Defence: However, it’s almost certain that the Tottenham boss will make changes in defence after their embarrassing display against Bayern so Ben Davies could be recalled in place of Danny Rose at left-back. Serge Aurier is suspended after being sent off against Southampton last weekend so Kyle Walker-Peters should be recalled at right-back.

I’d expect Davinson Sanchez to come back in to the back four as Pochettino freshens things up and Jan Vertonghen may be the man most likely to make way with Toby Alderweireld keeping his place.

Juan Foyth is lacking match fitness after recovering from injury so a place on the bench is the best he can hope for but Ryan Sessegnon is still working his way back to full fitness following a hamstring injury.

Midfield: Tottenham may move away from the diamond system and some have been calling for Eric Dier to be brought back into the side but we should still see Harry Winks keeping his place in the holding role so Dier and Victor Wanayama may have to settle for places on the bench.

Moussa Sissoko may be given a rest with Christian Eriksen coming in to the midfield after being named among the substitutes against Bayern while Tanguy Ndombele could keep his place as he was one of Tottenham’s better performers during the early stages on Tuesday before their collapse.

Summer signing Giovani Lo Celso remains on the sidelines with a groin injury that’s expected to keep him out until November.

Attack: Harry Kane was on the score-sheet against Bayern and he’ll keep his place up front against Brighton while Hueng-min Son may also be retained after he scored the opening goal for Tottenham before it turned into a rout.

However, Dele Alli is expected to drop to the bench after a disappointing performance in midweek. Lucas Moura is pushing for a recall but Erik Lamela may be the man to get the nod to start in the Spurs attack alongside Son and Kane. 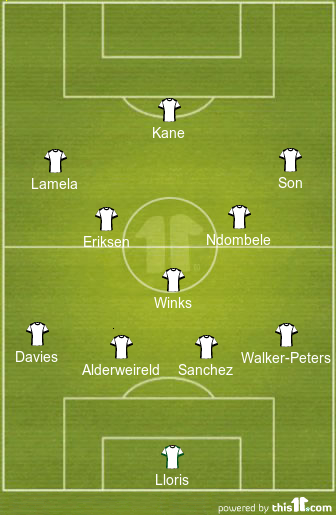