Liverpool take on Leicester City at Anfield on Saturday afternoon. Here is the team we expect Jurgen Klopp to select for the game:

Liverpool will be looking to maintain their perfect start to the Premier League season when they take on Leicester at Anfield on Saturday. Here is the team we expect Jurgen Klopp to select for the game:

Goalkeeper: Alisson Becker has been back in full training this week after recovering from a calf injury that’s kept him out for seven weeks. Klopp says he wont take any risks with him so he may opt to wait until after the international break but I wouldn’t be surprised to see Alisson start on Saturday after Liverpool conceded three goals against Salzburg on Wednesday night.

Defence: Joel Matip missed Liverpool’s Champions League victory with a minor knock that he sustained against Sheffield United last weekend but the centre-back is expected to be fit to return against Leicester.

Joe Gomez did reasonably well against Salzburg but I expect Matip to be recalled to start alongside Virgil van Dijk while Trent Alexander-Arnold and Andy Robertson should also retain their places in the full-back positions once again.

Midfield: Liverpool may be tempted to freshen things up in midfield with Naby Keita, Adam Lallana and Alex Oxlade-Chamberlain all pushing for recalls. However, Klopp may keep changes to a minimum with the international break coming up after this weekend.

Therefore, Fabinho should retain his place in the holding role and he’ll be looking to continue his excellent form this season while Gini Wijnaldum could also keep his position in midfield.

If Klopp does make a change then Liverpool skipper Jordan Henderson is the man most likely to be given a rest with James Milner being recalled.

Attack: The Liverpool attack was in full flow on Wednesday night with Sadio Mane getting on the score-sheet with a superb goal while Mohamed Salah also helped himself to another brace during the 4-3 win.

They are expected to once again start on Saturday while Roberto Firmino should lead the line after another superb all-round performance against Salzburg in the Champions League.

That means Divock Origi will have to make-do with a place on the bench against Leicester City while Xherdan Shaqiri could return to the squad if he passes a late fitness test having missed the last two games with a calf problem. 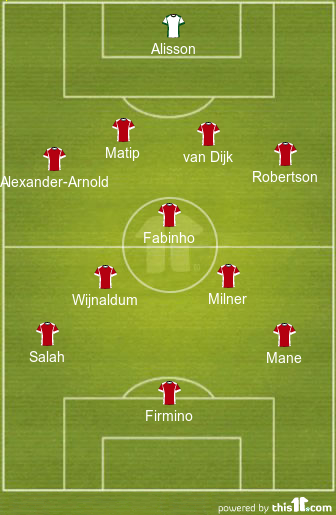