Tottenham take on Watford at the New Tottenham Stadium on Saturday afternoon. Here is the side we think Mauricio Pochettino will select for the game:

Tottenham will be looking to get their season back on track with a win when they take on Watford at the New Tottenham Stadium on Saturday afternoon. Here is the side we think Mauricio Pochettino will select for the game:

Goalkeeper: Hugo Lloris has been ruled out for several weeks after dislocating his elbow during Tottenham’s defeat at Brighton last time out. Michel Vorm has returned to the club as cover but Paulo Gazzaniga is expected to deputise between the sticks on Saturday.

Defence: Pochettino will be tempted to make changes to his defence after a poor showing at Brighton before the international break and Danny Rose is expected to come in for Ben Davies at left-back.

Serge Aurier is back in contention after servicing his suspension while Juan Foyth and Kyle Walker-Peters are also pushing for a recall but I think Pochettino will continue with Moussa Sissoko at right-back this weekend.

Toby Alderweireld and Jan Vertonghen will have been disappointed with their performances in recent games and Davinson Sanchez is hoping for a recall but I think Pochettino will stick with the Belgian duo against Watford.

Ryan Sessegnon is back in full training after recovering from a hamstring injury that’s kept him on the sidelines since he arrived from Fulham in the summer but the versatile youngster is still lacking fitness so isn’t in contention just yet.

Midfield: Harry Winks is expected to be recalled after being named on the bench against Brighton two weeks ago so Eric Dier is the man most likely to make way. Victor Wanayama may have to settle for places on the bench as Tanguy Ndombele should keep his place in the middle of the park on Saturday afternoon.

Summer signing Giovani Lo Celso is back in full training after overcoming a niggling groin injury but the Argentinean international isn’t match fit so won’t be involved for Tottenham against Watford.

Attack: Christian Eriksen is a doubt for Spurs after suffering a dead leg while playing for Denmark earlier this week. Eriksen will be assessed tomorrow and a late decision will be made but I don’t think he’ll be risked from the start.

Hueng-min Son is also not expected to start as he’ll arrive back in north London on Thursday after representing South Korea in a feisty clash with North Korea. The attacker will have just one day to prepare so Pochettino may decide a place on the bench is best for Son.

That should see Dele Alli given a recall to start against Watford while Lucas Moura could also come in to the Tottenham attack after being named on the bench against Brighton last time out. Erik Lamela could keep his place with the Argentinean supporting Harry Kane. 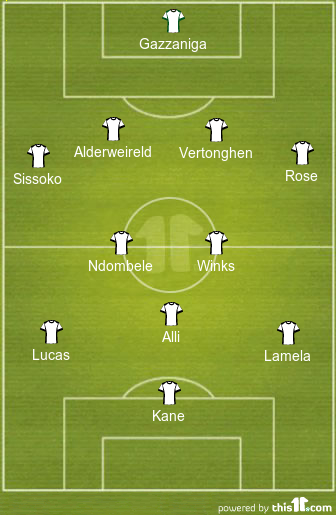