Liverpool will be looking to maintain their perfect start to the Premier League season when they take on Man Utd at Old Trafford on Sunday. Here is the team we expect Jurgen Klopp to select for the game:

Goalkeeper: Alisson Becker has been back in full training this month after recovering from a calf injury that’s kept him out since the opening weekend of the season. Klopp says he will make a late decision over the Brazilian but the Liverpool boss is expected to recall his number one goalkeeper for the trip to Man Utd. Adrian has performed well but he’s set to drop to the bench.

Defence: Liverpool have been handed another boost as Joel Matip is expected to be fit after overcoming a minor knock which kept him out of the win over Leicester before the international break. Joe Gomez is set to make way with Matip linking up with Virgil van Dijk in the middle of the back four on Sunday.

Liverpool have no fresh injury concerns to worry about in defence so Trent Alexander-Arnold and Andy Robertson should retain their places in the full-back positions once again as they are both key players under Klopp.

Midfield: Liverpool have plenty of options in midfield with Naby Keita, Adam Lallana and Alex Oxlade-Chamberlain all pushing for recalls, however, I think it will be Jordan Henderson who comes back into the starting eleven against Man Utd.

The Liverpool skipper was named on the bench against Leicester two weeks ago but he should come back in the team on Sunday. James Milner was excellent against the Foxes and scored a late winning penalty but I think he’ll still drop to the bench with Gini Wijnaldum and Fabinho keeping their places.

Attack: This is obviously a huge game so Klopp is expected to go with his strongest side as Liverpool look to maintain their perfect start to the Premier League season and cement their position at the top of the table with a ninth straight win on Sunday.

Mohamed Salah was an early doubt for the game after limping out of the win over Leicester with an ankle issue and the Egyptian underwent an individual training programme away from the rest of the first team on Thursday.

However, Salah is still expected to be passed fit to start against Manchester United so he’ll take his place alongside Sadio Mane and Roberto Firmino in the Liverpool attack this weekend.

That means Divock Origi will have to make-do with a place on the bench but Xherdan Shaqiri remains a doubt with an on-going calf problem. 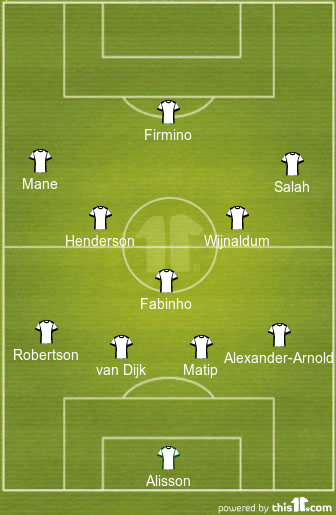