This is our match preview ahead of Manchester United’s clash with Liverpool at Old Trafford including team news, line-up’s and prediction

Manchester United will be desperate to halt Liverpool’s title charge when the two north-west rivals face-off at Old Trafford on Sunday afternoon.

Pressure is building on Ole Gunnar Solskjaer’s shoulders as the Norwegian coach has overseen United’s worst start to a league season in 30 years having won just two of their eight Premier League games so far this campaign.

A 1-0 loss at Newcastle United before the international break has left Man Utd sitting 14th in the table – just one point outside the relegation zone – so Solskjaer will be demanding a performance from his players tomorrow afternoon.

Liverpool on the other hand head to Old Trafford off the back of a faultless start to the new league campaign as the Merseysiders sit top of the table after winning all eight of their games so far this season.

Manchester City cut the gap to five points with a win at Crystal Palace on Saturday evening but Liverpool can restore their eight-point advantage if they can extend their winning run with victory over Man Utd tomorrow.

United will be without Paul Pogba as the midfielder is still recovering from an ankle injury that’s hampered him in recent weeks while David De Gea is a major doubt after picking up a groin injury while away with Spain last week. Sergio Romero is on stand-by to deputise in goal.

However, Aaron Wan-Bissaka is set to return from tonsillitis while Anthony Martial and Luke Shaw are also expected to be back in contention after recovering from muscle injuries that have kept them out for the past six weeks.

Jesse Lingard could also be back in the squad but Phil Jones, Diogo Dalot and Mason Greenwood remain doubts for the game while Eric Bailly is still on the sidelines with a knee injury.

Liverpool are set to welcome Alisson Becker back into the team after he recovered from a calf injury while Joel Matip is expected to return from a minor knock which kept him out of the win over Leicester before the break.

Mohamed Salah is also expected to be passed fit to start despite picking up an ankle problem two weeks ago but Xherdan Shaqiri is likely to miss out with a calf injury. 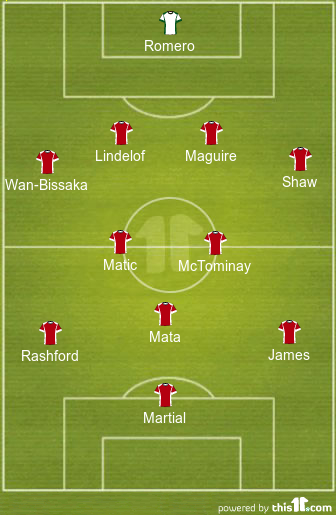 Man Utd 1-1 Liverpool: Obviously Liverpool are being backed as the favourites for this game as they’ve looked formidable in the league this season while United come into the match in disarray. However, I wouldn’t write Man Utd off too soon as this is exactly the type of game the players need to step-up and put in a performance.

Man Utd haven’t lost any of their last five home league meetings with Liverpool [W3 D2] and they should be desperate to dent their rivals title bid not to mention they need the points to climb up the table themselves. I don’t think United have enough to win and Liverpool will probably be the better of the two sides on the day, but I think the hosts might nick something from the game.