Manchester United take on Partizan Belgrade in the Europa League on Thursday evening. Here is the team we think Ole Gunnar Solskjaer will select

Manchester United take on Partizan Belgrade in the Europa League on Thursday evening. Here is the team we think Ole Gunnar Solskjaer will select for the game:

Goalkeeper: David De Gea hasn’t travelled as Solskjaer didn’t want to risk his number one aggravating a groin injury that he picked up while away with Spain during the international break so Sergio Romero will start in goal.

Defence: Man Utd went with a back three/five during the draw with Liverpool at the weekend but Solskjaer is expected to revert to a flat back four against Partizan Belgrade tomorrow night.

Axel Tuanzebe is ruled out with a hip injury that he sustained in the warm-up on Sunday while Ashley Young hasn’t travelled to Serbia and Luke Shaw remains on the sidelines. Therefore, youngster Brandon Williams could get another chance to impress at left-back.

Victor Lindelof is likely to be rested so Marcos Rojo could start alongside Harry Maguire at the back while Aaron Wan-Bissaka will continue at right-back as Diogo Dalot has been ruled out with a knock.

Midfield: Man Utd will once again be without the services of Paul Pogba as the midfielder continues to overcome a troublesome foot injury which has hampered him for several weeks while Nemanja Matic is also ruled out.

Scott McTominay should continue in midfield and Fred is likely to keep his place as Solskjaer has few options in the middle of the park with youngster James Garner among the substitutes.

Attack: Anthony Martial made his return from a thigh injury with a second half appearance against Liverpool at the weekend and the Frenchman is expected to start against Belgrade tomorrow evening.

Marcus Rashford could be rested ahead of Man Utd’s Premier League trip to Norwich City on Sunday so Martial may be deployed up front with Mason Greenwood coming in on the wing.

Jesse Lingard is back in contention after overcoming a thigh injury and he should start in the United attack tomorrow with Daniel James given a rest. Juan Mata could also come in to the team with Andreas Pereira making way. 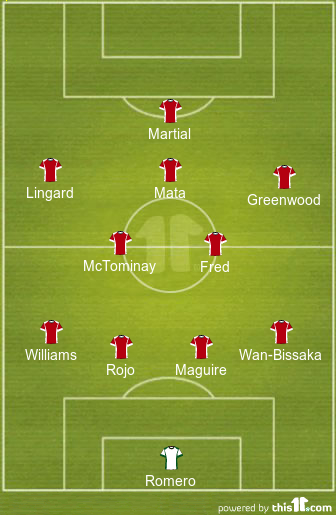