Liverpool welcome Arsenal to Anfield on Wednesday night in the Carabao Cup. Here is the team we expect Jurgen Klopp to select for the game:

Liverpool will be looking to book their place in the quarter-finals of the Carabao Cup when they welcome Arsenal to Anfield on Wednesday night. Here is the team we expect Jurgen Klopp to select for the game:

Goalkeeper: Assistant Liverpool manager Pepijn Lijnders confirmed this afternoon that Caoimhin Kelleher will start in goal tomorrow night. Adrian is expected to be on the bench with Alisson Becker rested completely.

Defence: Liverpool are expected to make changes at the back as Klopp protects his key players so Trent Alexander-Arnold is certain to be given a breather with youngster Ki-Jana Hoever set for a start at right-back.

Virgil van Dijk is also expected to be rested after picking up a dead leg against Tottenham at the weekend while Joel Matip is set for a spell on the sidelines with a knee injury so Joe Gomez should come in to the back four alongside Dejan Lovren.

Andrew Robertson has played a lot of football already this season so he should be given the night off meaning James Milner could be deployed at left-back against Arsenal tomorrow night.

Midfield: Liverpool are expected to rest Jordan Henderson, Fabinho and Gini Wijnaldum ahead of Saturday’s trip to Aston Villa so there will be wholesale changes in midfield.

Alex Oxlade-Chamberlain should come back in to the side and he’ll be hoping to impress against his former club while Naby Keita will also get another run out in the middle of the park for the Reds. Adam Lallana could be deployed in a deeper role as he’s been training as a deep-lying midfielder in recent weeks.

Attack: I don’t see Klopp risking any of his key forwards against Arsenal tomorrow night so Mohamed Salah, Roberto Firmino and Sadio Mane should all be rested in the League Cup clash. The Liverpool boss may have one on the bench but I don’t expect any of the trio to start.

Divock Origi is almost certain to be recalled and the Belgian international will be looking to take his opportunity to shine but Xherdan Shaqiri has been ruled out until next month with an on-going calf injury.

Youngster Rhian Brewster could get another chance to impress in the Liverpool attack while teen star Harvey Elliott is being tipped to make his full debut at Anfield after serving a two-week suspension. 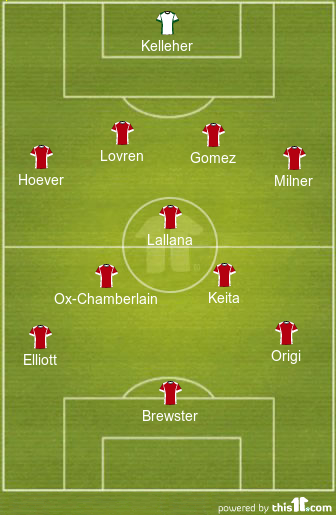