Goalkeeper: Hugo Lloris continues his rehabilitation from a dislocated elbow so Paulo Gazzaniga will once again start between the sticks against Everton this weekend.

Defence: Pochettino confirmed at his press conference on Friday afternoon that Jan Vertonghen is a doubt for the trip to Merseyside so Davinson Sanchez is expected to continue alongside Toby Alderweireld in the middle of the back four.

Danny Rose is ruled out of the game as he’ll serve a one-match ban after collecting five yellow cards this season so Ben Davies is set for a recall at left-back while Serge Aurier is likely to continue at right-back.

Ryan Sessegnon could be included in the Tottenham squad for the first time after recovering from a hamstring injury but a place on the bench is the best he can hope for as he’s lacking match fitness.

Midfield: Summer signing Tanguy Ndombele is expected to be recalled in midfield after being named on the bench during the 2-1 defeat to Liverpool last weekend.

Harry Winks should keep his place in the middle of the park while Moussa Sissoko could once again start for Spurs after cementing his first team place under Pochettino. Therefore, Eric Dier may have to settle for a place on the bench against Everton.

Giovani Lo Celso is back in contention after recovering from injury but the Argentinean international is expected to be named among the substitutes this weekend as he’s eased back into action.

Attack: Christian Eriksen had a poor game against Liverpool last week so he may find himself dropping to the bench this weekend while Dele Alli may also make way as he continues to try and rediscover his best form following a stop-start campaign.

Heung-min Son is expected to retain his place in the Tottenham attack while Lucas Moura may be recalled as Erik Lamela has been ruled out of the trip to Everton due to a hamstring injury that kept him out of the Liverpool game.

Harry Kane will once again lead the line up front for Tottenham and he’ll be looking to get himself among the goals again after finding the target during the defeat at Anfield last time out. 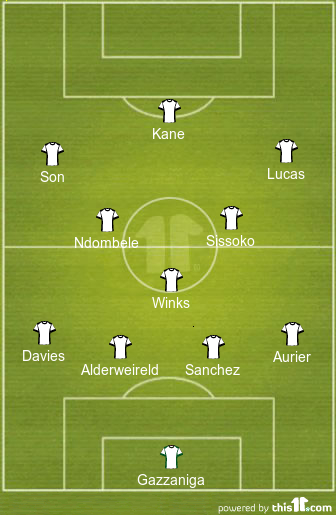