This is our match preview ahead of Tottenham’s Champions League clash withRed Star Belgrade in Serbia including team news, line-ups and prediction

Tottenham are in Serbia to take on Red Star Belgrade in the group stages of the Champions League this evening.

Spurs have endured a tough start to the new season and were left sitting 11th in the Premier League table – 10 points off the top four – following their 1-1 draw with Everton at Goodison Park on Sunday afternoon.

However, the focus is on European matters tonight and Tottenham can boost their hopes of qualifying for the knockout stages of the Champions League with victory over Red Star Belgrade in Serbia this evening.

Mauricio Pochettino’s men ran out 5-0 winners in the reverse fixture two weeks ago and another win tonight would move Spurs onto seven points – four clear of third-place – with two games remaining.

Tottenham have confirmed Harry Kane is back in the squad after he missed the draw with Everton on Sunday due to illness so the England hitman is expected to lead the line up front tonight.

Heung-Min Son has also travelled to Serbia but he may not be risked from the start after being left distraught following his challenge that led to Andre Gomes suffering a broken ankle at the weekend.

However, Erik Lamela remains out with a thigh injury while Jan Vertonghen is also ruled out of the game due to a hamstring complaint. Hugo Lloris is a long-term absentee with a dislocated elbow.

Pochettino might freshen things up with Juan Foyth and Danny Rose pushing for recalls in defence while Giovani Lo Celso could start in midfield in place of Christian Eriksen.

Red Star have no fresh injury concerns to worry about so they have a fully-fit squad to choose from. 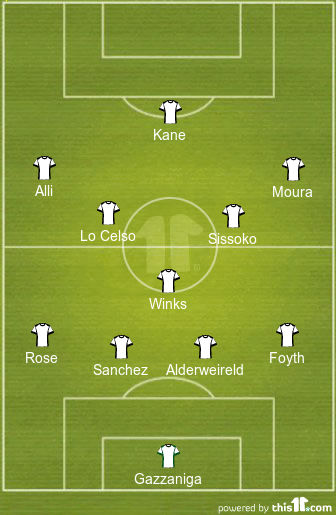 Red Star Belgrade 2-2 Tottenham: Spurs may have comfortably won at home but this will be a completely different experience as Red Star have an excellent record in front of their passionate home fans. The Serbian outfit have lost just two of their last 21 home games in Europe and beat Liverpool last season.

Tottenham have been woeful away from home all year and they will face a hostile reception from the Red Star fans so I think this is going to be an extremely difficult game. I have a feeling Tottenham will have to settle for a point tonight.