Manchester City travel to Anfield on Sunday to take on Liverpool. Here is the latest team news from the City camp and their expected line-up…

Manchester City travel to Anfield on Sunday afternoon knowing they need a win over Liverpool to cut the gap at the top of the Premier League table. Here is the latest team news from the City camp and their expected line-up…

Pep Guardiola held his pre-match press conference this afternoon and the Man City boss confirmed a major injury blow with the news that Ederson has been ruled out of the trip to Merseyside this weekend due to a muscle problem.

The Brazilian goalkeeper limped out of City’s Champions League draw with Atalanta in midweek and Guardiola told ManCity.com that he won’t be available this weekend so Claudio Bravo will deputise against Liverpool.

City also have injury problems in defence as Aymeric Laporte continues to miss out with a serious knee injury that’s expected to keep him on the sidelines until 2020 while Oleksandr Zinchenko remains out with his own knee complaint.

Fernandinho is expected to continue in defence against Liverpool with John Stones  likely to be recalled after being named on the bench against Atalanta in midweek. Nicolas Otamendi will be the man to make way. Benjamin Mendy should continue at left-back while Kyle Walker is set for a recall at right-back following his short stint in goal on Wednesday night.

Manchester City are set to be without Rodri due to a thigh injury while David Silva has been ruled out of the Liverpool game with a hamstring problem so Ilkay Gundogan will start in midfield alongside Kevin De Bruyne and Bernardo Silva.

With Leroy Sane also still on the sidelines with a serious knee injury it means Guardiola has limited options in attack so Riyad Mahrez and Raheem Sterling should keep their places on the wings.

However, there should be a change up front as Sergio Aguero is set for a recall against Liverpool after being named on the bench in midweek with Gabriel Jesus making way.

This is the side we expect Man City to field against Liverpool: 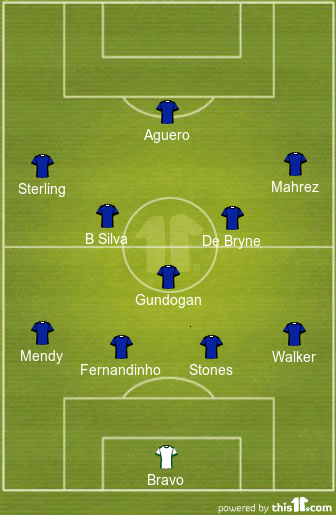