Manchester United take on Brighton at Old Trafford on Sunday afternoon. Here is the team we think Ole Gunnar Solskjaer will select for the game:

Manchester United take on Brighton at Old Trafford on Sunday afternoon. Here is the team we think Ole Gunnar Solskjaer will select for the game:

Goalkeeper: David De Gea was rested for the Europa League win over Partizan Belgrade so he’ll be recalled on Sunday with Sergio Romero making way.

Defence: Man Utd are expecting to have Victor Lindelof available again after he missed the game on Thursday night with a minor back injury. If he doesn’t make it, Marcos Rojo could keep his place after putting in a solid shift against Partizan. Harry Maguire will obviously retain his spot in the middle of the back four.

Ashley Young is suspended after accumulating five bookings this season so youngster Brandon Williams is expected to get a start at left-back in the continued absence of Luke Shaw while Aaron Wan-Bissaka will once again start at right-back.

Midfield: Manchester United will again be without the services of Paul Pogba as he’s still working his way back from an ankle injury that’s hampered him for several weeks while Nemanja Matic is also still out with an on-going muscle injury.

Scott McTominay limped out of the Europa League game on Thursday night after picking up a knock but Solskjaer is confident the Scottish international will be fit to start against Brighton on Sunday.

James Garner is an option for the Man Utd boss but I think Fred will keep his place in the middle of the park after putting in a decent display against Partizan Belgrade. Andreas Pereira is pushing for a recall but Juan Mata may have done enough to keep his place as he was impressive in the advanced midfield role on Thursday night.

Attack: Mason Greenwood took his chance in the Europa League after scoring a fine goal and grabbing an assist during the 3-0 win so he’ll be hoping to keep his place in the United attack this weekend.

However, Daniel James is expected to be recalled after being rested on Thursday while Marcus Rashford and Anthony Martial should keep their places in the front three so Greenwood may have to settle for a place among the substitutes.

Jesse Lingard is another option for Solskjaer but he’s been struggling for form this season so I think he’ll be named among the subs once again this weekend. 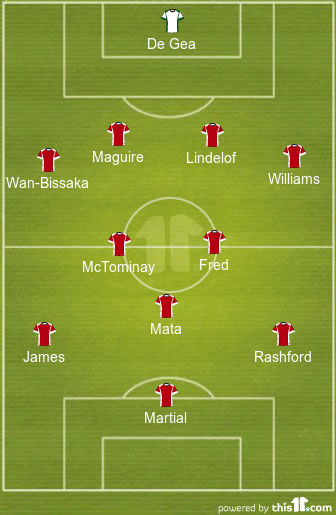