Man City attacker Raheem Sterling has responded after being axed from England’s game against Montenegro following a bust-up with Liverpool’s Joe Gomez.

Man City attacker Raheem Sterling has responded on Instagram after being axed from England’s game against Montenegro following a bust-up with Liverpool’s Joe Gomez.

Sterling and Gomez were involved in an altercation during the latter stages of Liverpool’s 3-1 victory over Manchester City at Anfield on Sunday afternoon which saw the Merseysiders open-up a nine-point lead over the defending champions.

It looked like the pair had quickly settled their differences as they were seen in an embrace after the final whistle but it appears bad feeling still lingered and spilled over into Monday when the players arrived for England duty.

According to the Daily Mail, Sterling reacted aggressively after Gomez tried to shake his hand in the player’s canteen at St George’s Park on Monday which led to the Man City winger trying to grab the Liverpool defender by the neck.

The newspaper says the heated exchange was met by disbelief by the on-looking England squad as the players initially thought Sterling was joking before the pair had to be separated by their team-mates.

Sterling later apologised to Gomez and the rest of the England squad but Gareth Southgate confirmed on Monday night that the City attacker has been axed for Thursday night’s Euro qualifier with Montenegro – although he remains in the squad for Sunday’s clash with Kosovo.

As reported by the Daily Mail, a statement by the FA last night confirmed:

‘The FA can confirm Raheem Sterling will not be considered for Thursday’s EURO 2020 qualifier against Montenegro as a result of a disturbance in a private team area at St. George’s Park today. He will remain with the squad.’

Sterling took to Instagram during the early hours of Tuesday morning to respond to the incident and the 24-year-old says he’s keen to put the altercation behind him and quickly move on after settling his differences with Gomez. 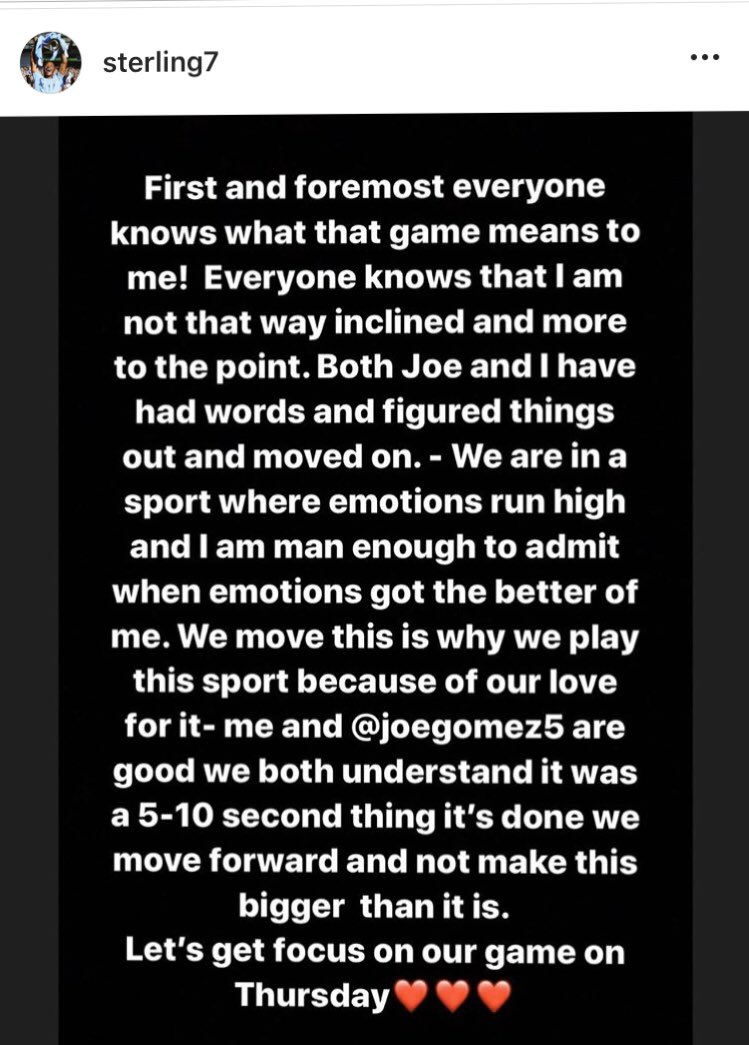 Obviously the bust-up will overshadow England’s preparations for their game with Montenegro as the Three Lions look for a win to book their place at next summer’s European Championship finals.

However, Liverpool fans may also feel Sterling’s overreaction shows the Manchester City players are feeling the pressure after slipping nine points adrift in the title race so it will be interesting to see how they react over the coming weeks.